Ekiti State governor, Kayode Fayemi, has said he has not told anybody that he will run for the presidency in 2023.

Fayemi, who is one of the pioneer members of the All Progressives Congress (APC) and Chairman of Nigeria Governors’ Forum, in an interview with the Punch Newspaper, said the National Leader of the APC, Asiwaju Bola Tinubu and himself never told anybody that they will run for presidency.

Speaking on the clash between his supporters and those of the former Lagos State governor, Bola Tinubu, over their respective presidential ambitions, Fayemi said there was no basis for any altercation between their supporters.

He added, “This is an issue that has not arisen at all and this kind of politics will not help us in APC or in the South-West neither is it helpful to the development of democracy, our zone and our race.

“Neither Asiwaju nor myself had told anybody to start attacking people. This is a matter which will sort itself out in the future.”

The governor also argued that the current security situation of the country is far better than what was obtainable under former President Goodluck Jonathan administration.

Fayemi said the efforts of the All Progressives Congress-led Federal Government in tackling the insecurity in the country have not been good enough but the current situation is better than what was obtainable under former President Goodluck Jonathan.

Fayemi noted that with the recent appointment of new service chiefs, he was hopeful that the war would be won, especially as it tends to boost the morale of the troops on the battlefield.

The country had been engulfed in insecurity problems, through which many lives have been lost. Apart from the Boko Haram insurgency in the North-East, there have been banditry, kidnappings and armed robberies in different parts of the country.

Meanwhile, during the electioneering that brought his party into power in 2015 and 2019, the President Muhammadu Buhari, said security, economy and fight against corruption were his cardinal programmes, with a promise to defeat the Boko Haram terrorists. But many Nigerians have expressed disappointment in the way the President has managed the affairs of the nation, especially in the three areas he promised to focus on.

The Serving Overseer of the Citadel Global Community Church, Lagos, Pastor Tunde Bakare, said during the week that the expectations of Nigerians hadn’t been met under Buhari, adding that rather than getting the change the APC promised, it appeared Nigerians had been shortchanged.

However, responding to a question on insecurity and how he felt the government had fared, Fayemi said, “You could say that the situation has not improved much in the sense that Boko Haram has only been technically defeated, not effectively clamped (sic).”

When asked if he would have been comfortable with the situation of things if the APC was not in power, he said, “I was in Maiduguri last month to commiserate with the governor when those 43 farmers were killed, so you could say, yes, they are still there. It shows that a lot more could be done by our government. Our best has not been good enough but significantly better than what transpired under the President Goodluck Jonathan administration.

“There is no question about that, but that is not comfort for victims, what victims want to see is obliteration of these marauders and we have got to figure out whoever is going to take over from this administration. We must help the Buhari administration to finally nail the coffin of Boko Haram before the administration leaves office. That, for me, is why I am excited by the recent changes of service chiefs.

“There are those who will say changing service chiefs will not change the status of the war, I can tell you as a student of security that war is largely won by the morale of the fighting men. If the fighting men don’t have confidence in the leadership, they will not display the necessary courage for the battle.

“I think the President has chosen well in terms of the people who have been selected as service chiefs and the Chief of Defence Staff. They are tested and trusted by the men and they are likely to deliver a lot better on the field.”

The governor argued that Nigeria could have been overrun by criminals if the APC was not in power. He also commended the President for those he appointed as service chiefs, saying with better intelligence, greater coordination with neighbouring security forces, partnership with the civilians from affected communities and the right equipment he was confident that the criminals would soon be defeated.

Fayemi also pointed out that the causes of the war should also be examined, especially the high number of children that are out of school.

He added, “What did we fail to manage well? It was utterly the failure of government that allowed things to degenerate to the point where our younger ones felt that the only option they had was to join the insurgents.

“How did we create a society that leaves the young ones with no other option but to become canon folders for war mongers? I think we all have to answer that question and then do something about it because we have 10 million kids out of school. It is a recipe for disaster.

“It is easy for those who want to recruit to find these kids, give them a little incentive even if it is food because they are hungry and then convert them to moles and canon folders for the war. That is why we need to work very strongly with the governor of Borno in order to manage this crisis that we have found ourselves in so that it doesn’t spread.” 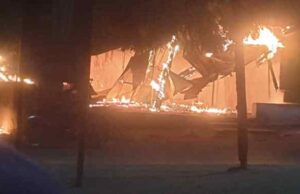 Why I Went To Court With A Native Doctor – Sowore...