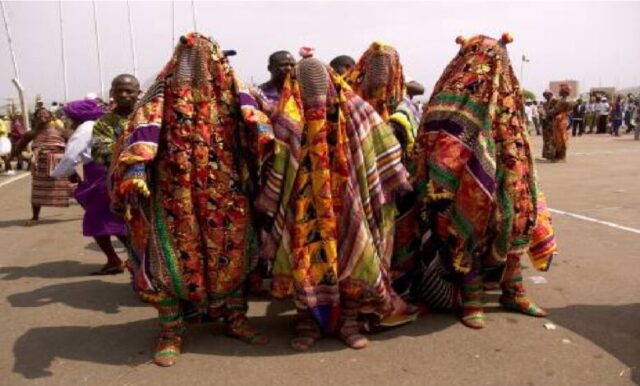 No fewer than five people were reportedly killed on Thursday night when a group of youths attacked a dreaded Ibadan masquerader, popularly called Oloolu while he was performing his annual ritual in the metropolis.

It was learnt that several others were reportedly injured.

The hoodlums, who allegedly attacked the masquerader at the Oje area of Ibadan, were said to be many.

According to a source, the irate youths who were armed with machetes, clubs, and cutlasses waylaid the masquerade when his rites had almost been completed.

“Yes, I was part of the entourage of Oloolu when the ritual was being performed by Oloolu. It is an annual ritual Oloolu performs around the city to ensure peace reigns in the state.

“He started the rituals in the morning and was about to round off in the evening at Oje when some youths, without any provocation, swooped on him and his followers.

“They were many, about 80 of them. They killed no fewer than five people. One of the attackers was a popular hoodlum called ‘Star boy’, who is known to be very deadly. The youths were armed with cutlasses, guns, and other dangerous weapons.

“Four boys were injured during the attack and are being moved from one place to another for treatment.

“We want Governor Seyi Makinde to empower local security outfits like Agbekoya so that the hoodlums will be arrested and handed over to the police for prosecution.”

The Iyaloja of Oje Market, Alhaja Oluwakemi Laaro Akala, who confirmed the incident said the youths threatened to burn her shop.

“The government should please help us to check the excesses of these hoodlums,” she said.

The Police Public Relations Officer, CSP Gbenga Fadeyi, said he had not yet been briefed.