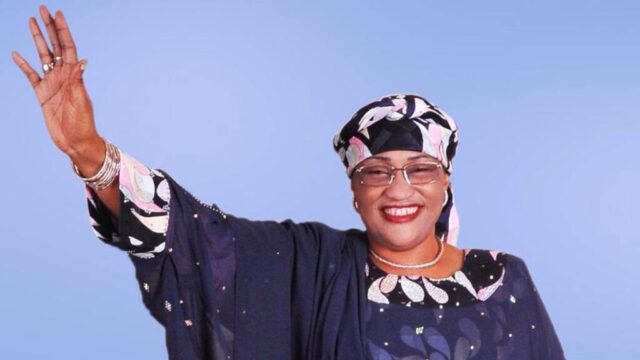 It was with a heavy heart that I received the news of the passing away of Hajiya Aisha Jummai Alhassan, fondly called Mama Taraba in Cairo, Egypt.

As I logged on Facebook on Friday , 7th May, 2021, in the evening, I was too stunned when I read a Facebook post from my friend, which broke the news of the death of Mama Taraba to me. I was thunderstruck and devastated. But I scrolled further to confirm the veracity of the news and I saw posts that authenticated my worst fears from so many friends, elders, and some of our leaders. Indeed, Hajiya Jummai as some of her older associates called her is no more.

Allah in the Holy Qur’an has made it clear in Surah Al_Baqarah, 2:156 of the Qur’an: “Verily we belong to Allah and verily to Him do we return.” So, I found solace in this verse.

I had met the late Mama Taraba, Senator Aisha Jummai Alhassan on numerous occassions, though from afar in most cases. The first was as a little boy, I could recount when she came to Bali, headquarters of Bali Local Government, on the eve of her elder brother’s re-election bid as a Senator of the Federal Republic of Nigeria. I had seen a convoy which I was simply told belonged to Hajiya. She visited some of her relations, friends, and her brother’s political associates before she left. Eventually, Senator A A Ibrahim was re-elected. That would be the first I heard of her. It was certainly not the last.

As she continued to enter uncharted territory, shattering the glass ceiling where there is, raising the bar wherever she served, or whenever opportunity presented itself. Although, more often than not, she sought those opportunities against all odds. In the process, her life produced so many firsts. From the first Female SUG President in the prestigious Ahmadu Bello University, to the First Female Attorney General and Commissioner for Justice of Taraba State, to the first Female Secretary FCT judicial Council, to the Chief Registrar FCT judiciary. These were not mean feats. But the late Mama Taraba was not done yet.

After an exceptional career as a civil servant, successful business woman, she ventured into Politics, something that is almost like a common denominator in her family’s celebrated history. Hajiya Aisha Jummai Alhassan joined partisan politics on the platform of the People’s Democratic Party, on the verge of the party’s Primary election. In the end, she defeated Senator Anthony George Manzo, one of Taraba’s most vibrant senators in history. This was not an easy task to execute.

But she went further to defeat former three times Taraba State Governor, Reverend Jolly Tavoro Nyame, a renowned, tested, and astute politician. Hardly would anyone disagree with you, if you called him, the Father of Taraba State politics then. A lot of facts buttressed this point, but Baba Taraba fell short of the votes Mama Taraba garnered in that general election. As a result of that she became the first Female Senator from Taraba State, in 2011.

In 2015 she memorably declared her intention to contest for the gubernatorial ticket of the All Progressives Congress, after she had left the People’s Democratic Party. Even though Senator Aisha Alhassan had gone against all odds, sprang so many surprises, and had reached the higher echelons of civil service and politics, this was a daring move to make, for so many reasons. Firstly, no woman has ever been elected governor in Nigeria, though we have had a female governor once, Dame Virginia Etiaba in Anambra State.

Secondly, if the states with more progressive ideas have not produced a single elected female governor then, what happens to Taraba State located in the North East geo-political zone where conservatism seem to largely hold sway? These and many more considerations which some are better left unsaid influenced the electioneering. And to a large extent the ultimate result.

Senator Aisha, the great amazon became the first Female gubernatorial flagbearer of a major party in Nigeria with great national appeal, I write this with all due respect to those who contested on regional parties platform. She fought gallantly in the difficult and polarised terrains of Taraba politics. The result of which saw her almost emerging as the first elected Female Governor in Nigeria. However, Governor Darius Dickson Ishaku was declared the winner and returned elected in that now, historic election.

Mama Taraba challenged the results in court with all tenacity. Hence, she was declared the winner in tribunal. Subsequently, it was upturned at the Appeal Court and Supreme Court. All through, something was evident and even her harshest critics would accede to this: she fought the legal battle with grit and will power of a battle tested general.

Senator Aisha Jummai Alhassan was not done. As she was made the minister of Women affairs of the Federal Republic of Nigeria, arguably: a befitting portfolio for a daughter, mother, grandmother, who had championed the causes of women and the downtrodden in her own unique ways. For the young girls in Jalingo, her hometown, Taraba State, and indeed the country, they have a good role model to look up to, whenever they seek to tread the path she trod.

For Chioma in Arochukwu, for Amina in Gaya, for Jamila in Nguroje, for Amal in Gassol, for Margaret in Warri, for Omotayo in Ogbomosho and indeed, for every girl child across the nation: they can all dream to be governors and one day, yes, one day, we will see it materialise. And when that happens, pioneers like Senator Aisha Jummai Alhassan would have laid the foundation for that historic victory.

In years to come her unalloyed loyalty to former vice President Atiku Abubakar, something that she never failed to declare even when everything was at stake like when he was to contest an election with her boss as of that time, President Muhammadu Buhari, which subsequently led to her resignation as minister in July, 2O18 would continue to be subject of discussion that generates different views, therein are lessons to be learnt regardless of how you view it.

Jalingo, Taraba State, and Nigeria mourns her illustrious daughter. But I think it will be even better, if we borrow a leaf from her book where she excelled in empowering so many people from different places, faiths, and backgrounds. It will be more apt, if we learn from her life’s rich experiences, struggles, shortcomings, and thriumphs to chart a new course for Taraba state and indeed the entire nation.

The celebrated amazon, trained lawyer, shrewd administrator, and courageous politician was born on Friday and died on Friday in the Holy month of Ramadan. I pray that Allah forgives all of Mama’s shortcomings, grant her Janatul Firdaus, and bless the entire family that she left behind.