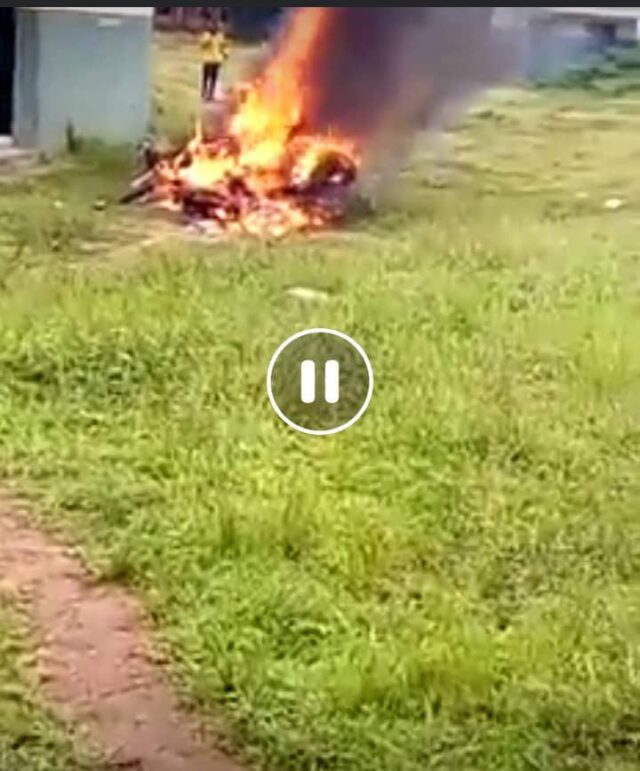 Gunmen suspected to be members of the Indigenous Peoples of Biafra (IPOB) on Monday stormed the Comprehensive Secondary School, Nkume in Njaba Local Government Area of Imo State and stopped students from taking their examination.

Our correspondent gathered that the students were preparing to sit for English in the ongoing Junior Secondary School Examination before the gunmen forcefully dispersed them.

Both teachers and students fled in different directions as the gunmen shot sporadically into the air.

The gunmen set ablaze some motorcycles belonging to some of the staff and students.

Although there were no report of casualties, a video of the incident showed the students and staff shouting and running for their lives.

Police Public Relations Officer, CSP Mike Abattam, could not be reached for comments.

IPOB had declared Monday as sit-at-home to drum support for the release of their leader, Nnamdi Kanu, who is facing some charges before an Abuja High Court.

Apart from Mondays, the group also declared sit-at-home any day Kanu is to appear in court
The command’s spokesperson, Abimbola Oyeyemi, confirmed the incident to newsmen on Sunday.

According to Oyeyemi, the ex-convict was at the police station in full military camouflage to seek the release of a suspect.

However, he met an Air Force personnel at the station, who accused him of not paying him compliments, considering the rank on his uniform.

“On getting to the station, Ogundeji met an Air Force man, one Cpl. John Temitope, who accused him of failure to give him official compliment, as a result of which a quarrel ensued between them,” Oyeyemi stated.

The brawl had attracted the attention of the Sango-Ota DPO, CSP Godwin Idehai, who interrogated the two of them.

Oyeyemi explained that “it was during the interrogation that the police discovered that Ogundeji is not a military man.”

He added that the police also got to discover that “a court once convicted Ogundeji for impersonation.”

Meanwhile, a full investigation has been ordered into the past activities of Ogundeji by the State Commissioner of Police, Edward Ajogun, it was learnt