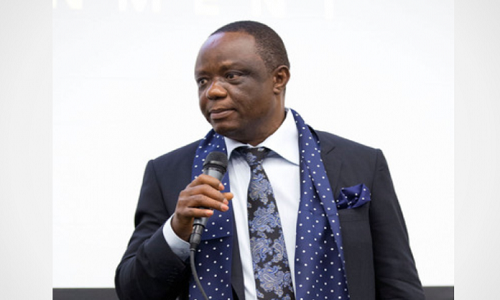 A chilling canopy of saudade feelings have continued to spread across Edo State and beyond. It easily passes as moments of epiphany compelling a realization of the extent of our collective loss as a people. Simultaneously, a heart wrenching bittersweet surge of emotions alongside a mix of mournful lullabies immersed the ancient land of Igodomigodo! From Edo to Udo, from the land of Erua where the great Ovonranmwen found refuge to the sacred lands of Ovator of Igieduma, Okhuahe of Okhuahe, unto the land of Olokun in Urhonigbe closely dovetailing into the larger Ugo, the land of Ebomisi, to Ugboko, the home of Ekaba spirit, all of which are the great ancestral deities of Edo land comprising of Ogbe and Ore’ Nokhua, the announcement quaked our world and it temporarily came to a standstill, as soon the family caused a terse statement to be released confirming that the spirit of the great business magnate and a nonesuch philanthropist, Captain (Dr.) Idahosa Wells Okunbo had taken to the sky. Amidst the reeling of anguish, the announcement that Captain Hosa Okunbo will be buried in Benin City and the opportunity it would afford the populace to pay their last respect to him, brought a tinge of warmth that the cold drizzle and the seeming inclement weather, in the twilight of that day could not dampen. From that day till date, the people have not ceased to mourn while waiting with baited breath for him to be victoriously welcomed home. He fought wars of different hues and complexions and conquered all, but succumbed to the hydra headed war against humanity – the ravaging onslaught of illness. The best of brains and efforts in technology and medical science has so far been humbled by destructive growths pining away the best of man and demystifying man’s overrated capabilities. But the people with their overflowing love are resolved to shame death by their ululation, their celebrations, their testimonies and tributes and to stand up against death in thunderous chorus; death, where is thy sting?

This announcement was so auspicious that, it was all that was needed to prove public expression of grief, that the written and spoken tributes about the greatness and elegance of his character were absolute words of truth that freely emanated from the hearts of the people. For a while it seemed that the tributes and condolences were the usual rituals that the bereaved were accustomed. Rather, it was an emphatic endorsement of the hagiographical credentials of Cappi and his ultimate canonization by the people. He truly carved his name in hearts and not tombstones. A deeper investigation revealed that his greatness was a product of inner purity of heart. His life was underpinned and guided by the philosophy which was rooted in nature. Nature was designed by God to provide guidance on how man should live. Take a look around and see how created things deliver free services to man and his environment amidst the cheering of gracefully waving banners. The lesson in God’s creation, often overlooked, is huge. It teaches that we are created to live for each other and not merely for ourselves! Most significantly, this is in sync with the traditional practice of Ubuntu in parts of South Africa. Ubuntu means ‘I am because you are or I am nothing without you’. In essence a person is a person through other people. That is to say our humanity is tied to each other. What could be loftier and humbler than swooning over ones neighbor with such elevated philosophy of life! He was a chip of God’s nature exemplified in the animating humanistic essence that puts man on top of all creation!

We can easily find that his uncanny humility and civility had a sound foundation. He discovered by himself that everything is inter-connected in the World. That the key to unlock and illuminate the intricate connections are within man; humility and civility. He was intrinsically and abidingly attached to these humbling values which served as his gateway to greater truth about our mission on earth. As a proud Edo man he adopted the common name of any adult male ‘Eghele’, in the ‘Obacentric’ worldview of Edo land – Okpioba. This generic name was symbolically adopted as a demonstration of unalloyed loyalty to Edo people and the monarchy. He could not be controlled by personal wealth and could not be boxed by power paradox which comes through either financial power or political power. Rather, he stripped material wealth of the mystique that less mortals build around it! What further testimonies attest to this, than when he performed a song in Oba Palace with a crust of unleavened vocal toast. The lyrics of the song ‘Kamwenyo’ which literally means ‘Count me in’. In essence, it was a patriotic clarion call to other well meaning citizens of Edo State, to come and do their bit in the development of Edo land. He danced before the Oba, not with wild abandon but with graceful regal steps. The distant echo of his rich bass voice singing Kamwenyo will outlive many that are still alive today! Yes indeed, he has earned for himself a place in the hall fame of a great Edo man who joined hands with the Oba to develop not only Edo land but Edo State in general.

His life was a great teacher. His originality and authenticity was his strength. Never once was there a conflict of identity. Today, originality and authenticity has become a serious problem in our society particularly among those in key positions of authority. It has almost become fashionable and commonplace to find offsprings with elitist pretensions silhouetted against the background of their place of birth. They are not fluent in their mother tongue neither are they proud of their culture and tradition. Yet, some of them by subterfuge and devious tacts navigate their way into positions of privileges to the misfortune of the people. Fluent spoken English language has no bearing with credibility and character! Through Cappi we have learnt that our strongest muscle is our mind and our greatest asset is our character. He was never bugged or outraged when desperados bark at him simply because they are intimidated by his reach and strengths. Rather than engage betrayals in altercations, he would rather take dignified walk away from mud puddles, impeccably untainted. He believed that anyone who uses his massive wealth, position of authority and power to wage vengeful wars against perceived enemies must be wrestling with an internal war against himself! Such a one deserves sympathy!

As men and women of all races bow in tribute to this great man of unmatched conscience, many of those who were close enough to him will remain implacable for decades to come. The reason is not far fetched; we were only beginning to see what the power of his love for Edo nation could accomplish. We had indeed, seen nothing compared to what he planned to do. He had positioned himself as a strategic catalyst for positive change. But he needed a well motivated political leader as development partner. That ostensibly informed his sponsorship of top government officials abroad in 2017. That also informed his significant but peripheral role in politics. The least we can do is to continue to honor the monuments of his great legacies as a man of compassion, dedicated service and commitment to Edo nation. In circumstances like this, it is fitting to agree with thinkers like Rossiter W. Raymond who said ‘Life is eternal, and love is immortal, and death is only a horizon; and a horizon is nothing save the limit of our sight.’ Therefore, one can now more emphatically and assuredly declare that indeed, Captain Idahosa Okunbo is not dead, but lives!
Yes, he lives!