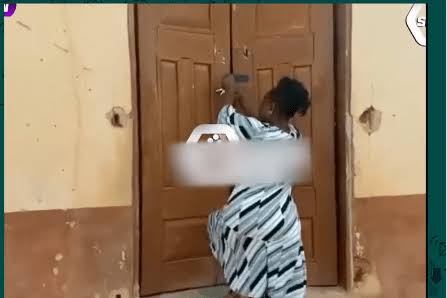 An estranged former wife of a Pastor whose name is given as Apostle Patrick Owusu has shocked congregants of his Church after she caused a scene at the Church premises on Sunday.

In a video which has since gone viral, the lady in question who says she took the Pastor who was a low life and made him who he is today was seen locking the church building whiles service was ongoing.

She is heard saying that her former husband after all she has done for him has taken her father to court over a land she willingly gave out to him to start a Church.

The lady contends that now, the Pastor who was then a low life knows how to send women to boutiques to but clothing for them after she has worked with him to make life worthwhile for him.

The lady vowed to deal with the Pastor who she claims has been ungrateful to her and therefore questioned whether he has truly been called by God like he proclaims.

”I took care of you, I bought your clothes for you, you married me with only two trousers and didn’t even have a house to live in. Today you know how to take women out and shop at boutiques for them! Ungrateful man! God will punish you.”

Information gathered inducates that the Pastor is now married to the girlfriend of his organist in Church.

He is said to have divorced his wife for the second lady because after thirteen years of marriage, they have not been able to have a child and the Pastor been worried about the development moved in for another lady so he can have children of his own.

Insecurity: Primate Ayodele In Fresh Prophecies On Governors, ‘Mourning In Villa’, Others