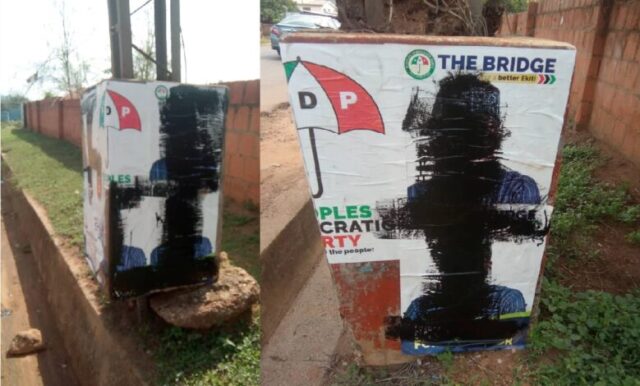 Ahead of the 2022 governorship election in Ekiti State, the campaign posters of one of the leading aspirants under the platform of the Peoples Democratic Party (PDP), Bisi Kolawole, were destroyed in Ikere Ekiti.

Newsflash Nigeria had reported that the former governor, Ayo Fayose, had endorsed Otunba Bisi Kolawole, the incumbent Chairman of PDP in the state as his preferred candidate for the 2022 governorship election.

Kolawole, from Efon Alaaye in the Ekiti Central Senatorial District, was a former House of Assembly member from 2007 to 2011 and Commissioner for Environment under the administration of Fayose between 2015 and 2018.

Newsflash Nigeria gathered that campaign posters of incumbent Chairman of PDP flooded strategic locations in Ikere-Ekiti and other towns in Ekiti on Tuesday last week.

The posters with the logo of the Peoples Democratic Party (PDP) carried a bold inscription, “THE BRIDGE, Bisi Kolawole for Governor”.

They were pasted in conspicuous places in Ado-Ekiti metropolis, including Ajilosun, Basiri, Ijigbo, Ilawe Road, Okeyinmi; and other towns, including Ikere Ekiti, Efon-Alaaye and swing vote communities across the 16 Local Government Areas of the state.

The posters attracted attention, with people clustering around to discuss politics.

But in the early hours of Tuesday, the campaign posters were allegedly destroyed in Ikere Ekiti by suspected to be hoodlums.

The posters were tainted but usually in an unknightly or unscientific manner.

Kolawole poster
Kolawole who hails from Efon Alaaye but his wife is from Eselemo compound in Ikere Ekiti.