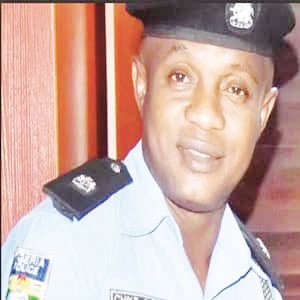 Imagine irate youth protesters suddenly becoming friends with the police, protecting the station from being vandalised, especially during and after the #EndSARS. That was the case of a policeman at the Agboju Divisional Police Office, Satellite Division in Oriade Local Government Area of the Lagos State. Like the case of Chief Superintendent of Police (CSP) Rabiu Garba of Fegge, Onitsha in Anambra State, the station was one of the few ones in Lagos that were not burnt down during the #EndSARS protests that rocked the entire country. AMBROSE NNAJI writes of the man and how the entire community is calling for his promotion and recommendation.

Nightfall at the Satellite Town of the Lagos State often brought with it fear. Fear brought about by the nefarious activities of armed robbers and miscreants.

This had been the case for some time but little did they know that their end would come so soon.

Their end began when every night some policemen, led by their superior, would take to the streets, despite his position, to comb the Express Road. He and his men ensured that traffic robbery was brought to an end in Satellite Town of Lagos State.

At Satellite Town in particular, there are many motor parks and young men who take hard drugs. But to his credit many hoodlums and notorious criminals have been contained. Welcome to Chike Oti, the DPO of Agboju Police Station.

Here is a man who ensured his jurisdiction was rid of attacks by miscreants. The most-talked about achievement was Oti’s overthrow of a notorious terrorist who paraded himself as ‘Oba’ that once lived in Satellite Town.

“For more than 25 years, people in Satellite Town were tied to the Oba’s apron strings, suffering under him,” began Oti. “Oba was an outlaw whom no one could challenge his authority, else they were done for. I am talking of a man who would drive a landlord out of his house and possess it, and hand it over to his son. He threw the man’s tenants away and put his own tenants. He operated with impunity: all tanker/trailer drivers must pay him. But I stood my ground and gave him a good fight, won over him and today, we are free,” he recounted.

His dedication to duty not only caught the eyes of the community but ended up saving his station and the lives of his men during the #EndSARS saga. Oti’s station, like that of Chief Superintendent of Police (CSP) Rabiu Garba of Fegge, Onitsha, was one of the few stations in Lagos that were not burnt down.

“The EndSARS saga would have provided an opportunity for this criminal to unleash terror on the people. Here in Satellite Town, nobody was killed, no property was lost, nor limb, hand or finger. People here were going about their business as if here was not part of Lagos, on account of ensuring that Satellite town was crime free. I was bold to meet with the protesters even when other DPOs ran away. I couldn’t have run away, a captain doesn’t run and leave a ship. No DPO ran away because of these miscreants and that was why, in most cases, DPOs were the ones always killed, because they were the last to leave.

‘’What gave me the zeal and courage to stay on was, I realised that about 98 per cent people were behind me. During the crisis, different communities were all coming here to assure me that they were with me. They were coming with things to show support, to ensure that officers under me were fed, they came with a whole lot of things, food, water and what have you. There was no other way to prove that a community was behind a servant than at a time like that, to show solidarity,” Oti recounted.

It is no wonder, then, that the leaders and residents of the community, led by the Chairman, Oriade Local Government Area, Hon. Ramotalai Akinola-Hassan, are applauding him and calling for his commendation by necessary authorities.

The LGA chairperson, in an interview with this reporter, affirmed that she had never met any police officer that’s as dedicated to duty as Oti.

In her words: “During the #EndSARs, it was the people in Agboju, Kuje that surrounded him, and drove those hoodlums away. When you talk of being humble to the core, that’s Oti, there is no single time you will call him, he will not answer you.

“There is no crisis time you call him, that he won’t be on ground: he’d come with his full squad. The kind of dedication to duty, relief and confidence he has brought to Satellite Town has reduced crime in the area.

While recommending Oti for promotion to a higher rank, Akinola-Hassan urged the government to reward dedicated officers that had served with integrity not only plaques but elevation to serve as a lesson to others.

In his view, the DPO’s ability to carry along the grassroots, including the community development associations (CDAs) and their leaders, is worthy of note.

Imitini stated that the issue of attacks on unsuspecting public by hoodlums in the area had been brought under control, disclosing that the DPO was in touch with Okada riders who volunteered themselves to going about looking for black spots in the area.

Sariki Yaki Amuwo, who has lived in Satellite Town for over 21 years and was on ground when the DPO was transferred to the area, said: “Since his coming, the community has not had any problem without him coming to ts rescue. It’s no longer difficult for anyone to see the DPO at the police station. People can now table their complaints to him without fear of being attacked later. Call him anytime even in the middle of the night, he would answer you and swing to action immediately.

ADVERTISEMENT
“Life pays you back in your own coin. He’s a good team player that’s why the EndSARS destruction did not get to this place. None of the protesters attempted to get closer to him, if he was not in the good book of the people, they would have attacked him too. He doesn’t discriminate whether one is Hausa, Yoruba or Igbo, he believes everyone deserves equal attention.”

The Assistant Secretary General, National Association of Government Approved Freight Forwarders (NAGAFF), Akpuobasi Pius, urged the police of all ranks to cooperate and collaborate with the people and ensure sincere intention to live and socialise with the populace, saying that will stall a reoccurance of the #EndSARS crisis.

He said: “I feel the police should work on their human relations even as they attempt to build confidence in the people. If somebody is protecting you, at the time of need, you’d have to also come to his aid at his own time of need. That’s what really played out during the #EndSARS protests. It’s no magic, he has been part of them, and they see him as one of them, a fellow comrade, as a man they have respect for.”

Also, Chairman, Okada Riders, Close 1, Festac Town, Mohammed Ayisi, who’s also the chief security officer (CSO) for Police Volunteer in the area, praised Oti’s leadership style, saying: “Oti has brought about relative peace here among all the tribes. That’s the kind of man that takes you like his brother even when you are not the same tribe, not of the same language or religion. We are doing our business effectively because there is peace here”.