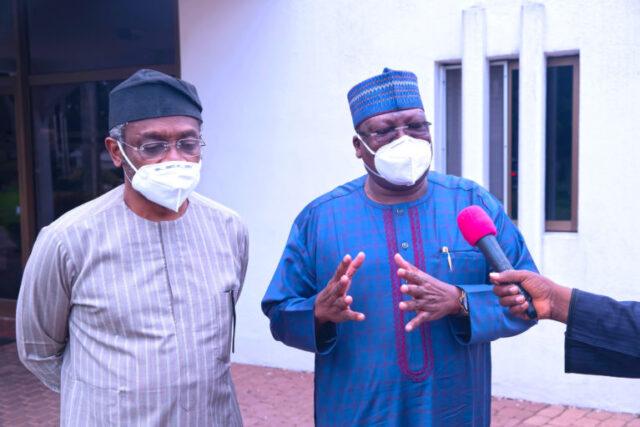 Nigeria’s Senate President, Ahmad Lawan and the Speaker of the House of Representatives, Femi Gbajabiamila were paid in dollars (millions of naira) to ensure the passage of the controversial Petroleum Industry Bill (PIB) recently signed into law by President Muhammadu Buhari, SaharaReporters has learnt.

A top source told SaharaReporters that other federal lawmakers –senators and House of Representatives’ members –also received bribes in dollars to ensure the passage of the bill.

The payment of the monies was said to have been facilitated by the Minister of State for Petroleum Resources, Timipre Sylva.

The upper chamber passed the PIB, 2021 after the clause by clause consideration of the report of its joint committee on Petroleum (Upstream, Downstream and Gas) on PIB.

The Senate had before then, held a closed session with Sylva, and the Group Managing Director of the Nigerian National Petroleum Corporation, Mele Kyari.

Stakeholders had vehemently rejected the provisions of the bill in respect to the percentage ceded to host communities, urging Buhari not to sign the bill into law.

For instance, the Host Communities of Nigeria Producing Oil and Gas, HOST ON, said it was insulting for the Senate and House of Representatives to cede only three and five per cent equity shareholding respectively to the oil and gas producing communities in the Petroleum Industry Bill, passed.

Their president, Benjamin Tamanarebi said the PIB passed by NASS was a fruitless exercise and unacceptable to the host communities.

He was quoted as saying, “Imagine for over 63 years of neglect, deprivation and marginalisation of the aborigines who have suffered untold hardship in the midst of wealth, for the first time after many years of agitation, asking for only 10 per cent equity shareholding and the leadership of NASS is considering five per cent and three per cent viewing it that they have done us a favour.

“This is unacceptable and we reject the offer.

“It is our sole right as the aborigines, it is our land, it is our water ways, Nigeria is claiming it because we are from Nigeria state. Then why denying our rights to benefit, right to have clean environment, right to have potable water to drink, good hospital, electricity, good roads but leaving us in abject poverty, in a desecrated environment without considering the UNFCCC/ CDM criteria.

‘We will still study other areas in the Bill to address it in due course, for example, section 104 (2) on gas flaring where funds on penalty should be paid to the government, we reserve to study all sections, but is a fruitless exercise as usual,” he said.

In the approved bill, the Senate approved a funding mechanism of 30 per cent of NNPC’s profit from oil and gas for frontier basins. This fund is for oil exploration in frontier states.

However, in the report, the states referred to as ‘frontier basins’ were not clearly stated.

This had also generated controversies as it is provision is seen to be in favour of Northern states where oil exploration is being carried out.

In their July 5 meeting, governors of Nigeria’s southern states also rejected the proposed three per cent share to host communities in the Petroleum Industry Bill.

A communique issued by the governors at the end of their meeting in Lagos, said the governors, instead, supported five per cent share to the communities.

“However, the Forum rejects the ownership structure of the proposed Nigeria National Petroleum Company Limited (NNPC).

“The Forum disagrees that the company be vested in the Federal Ministry of Finance but should be held in trust by Nigeria Sovereign Investment Authority (NSIA) since all tiers of Government have stakes in that vehicle,” it said.

Also, the Pan Niger Delta Forum (PANDEF) rejected the three per cent approval for the development of host communities by the Senate.

The national publicity secretary of PANDEF, Ken Robinson, while reacting to the approval, said the government cannot transform the oil industry without transforming the communities in whose backyard the industry is operated.

“The region is the biggest victim of the fraudulent Nigerian Constitution we are using and the lopsided nature of the country. So, what played out is what is playing out in every aspect of the country, particularly under this President,” he said.

A former Provost Marshal of the Nigerian Army, Brigadier-General Idada Ikponmwen, said the three-five per cent proposed as a benefit for host communities under the Host Community Trust, despite the abundant oil wells in their land, while 30 per cent is earmarked for exploration of oil in the northern part of the country in the PIB is an open invitation to anarchy.

He said: “The idea of three percent or five percent proposed as a benefit for host communities from oil proceeds while 30 per cent is embarked for exploration of oil in the northern part of the country clearly reveals arrogance, insensibility, disdain on part of the proponents of the PIB.

“Deeply examined, it is an open invitation to anarchy. This move cannot be acceptable to those who have borne the brunt of oil exploration and exploitation of oil and gas in Niger Delta, the President must be enjoined to reject the bill and have same returned to the National Assembly.”