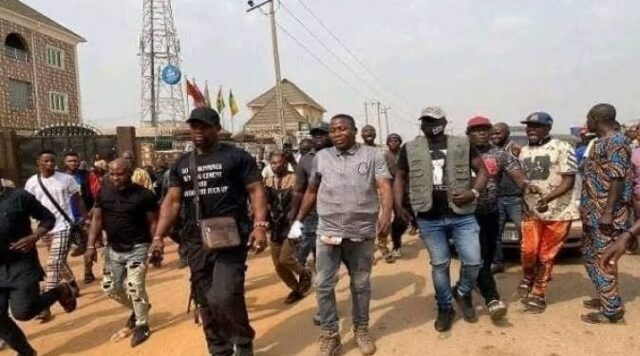 One of the pastors of the Christ Apostolic Church (CAC), Segun Adebayo, has revealed that God sent Yoruba Freedom Fighter, Sunday Adeyemo, popularly known as Sunday Igboho to rescue Yorubaland from killers.

The cleric said Sunday Igboho’s agitation for Oduduwa Republic was ordained by God.

The cleric remarked while cautioning Gani Adams, the Onakakanfo of Yorubaland against fighting Igboho.

He urged Igboho and Adams not to allow politicians to divide them because they will be victorious in the end.

The cleric warned Igboho to be wary of the people around him.

“Solution will not come from him again. I am praying for Baba Akintoye – Prof Banjo Akintoye. I saw that they gave him a solution. That was why I said Sunday Igboho and Gani Adams should not fight each other.

“What God sent Igboho to do is what he is doing. Let Gani Adams not let people push him. I called Baba Akintoye and I told him that he should warn Sunday Igboho to be wary of the people around him.

“They should not let kings and politicians divide you and Igboho. You are the ones that God will give the glory in this struggle. It is he who ends the struggles that we will say well done too,” Sahara reporters quoted him as saying.

Sunday Igboho has been leading the vanguard for the actualization of Oduduwa Republic.

This agitation is following the killings of people of the Southwest by armed herders.

Igboho recently warned armed Fulani herders to vacate the Southwest, while insisting that Oduduwa Republic will be actualized soon.