The exercise which was well flagged off by the Peoples Democratic Party (PDP), leaders from across the Local Government Area, witnessed showers of encomiums on the donor who is the immediate past Councillor of ward one (1), in the last Legislative Council of the LGA, as they described his gesture and benevolence as a very laudable initiative and highly commendable.

In his address, the donor admonished the pupils to see themselves as the best amongst their peers who are in the private schools, while hinging his assertion on the paradigm shift from analogue to digital approach to teaching and learning introduced into the public school system in Edo state by the Obaseki administration, with well trained teachers who can compete favourably, anywhere.

At Uchi Primary School, Auchi, Hon. Kadiri unequivocally said, ” Uchi primary school remains my alma mater, and I want to use this medium to inspire the pupils to take your studies very seriously as you have no limitation irrespective of whether you are attending a public school or not, and I foresee most of you here becoming Governors, Senators, Medical Doctors, Engineers, Architects, and whatever height you may wish to attain in life and destiny.

Apart from carrying out my Corporate Social Responsibility ( CSR), I wish to also inform all and sundry that, this is my own little way of supporting the vision and mission of the administration of His Excellency, Governor Godwin Obaseki, and his loyal and digital Deputy, Rt. Hon. Comrade Philip Shaibu, in the area of education and the ‘Making Edo Great Again’ agenda

There is no alternative to Education and this accounts for my embarking on this project with a view to making life more meaningful for our leaders of tomorrow”
Kadiri said.

The official unveiling of the instructional materials was symbolically performed by the immediate past Secretary to Etsako West Local Government Area, Hon. Zibiri Mohammed, while various stakeholders, particularly the Head Teacher of the school, took turns in eulogizing the donor for his kind gesture, particularly at a time in the country, when resources are indeed very scarce.

To this end, it becomes very expedient for all and sundry to throw weights behind this illustrious son of Etsako West, as he attains higher feats in life and destiny, and do better in the area of Education and other allied areas that builds capacity.

TO GOD BE THE GLORY 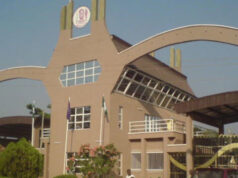 Afemai Reporter - August 4, 2021
0
A former student of Government Secondary School (GSS) Chibok, in Borno State, and her husband, a Boko Haram-ISWAP terrorist, have surrendered to troops of...