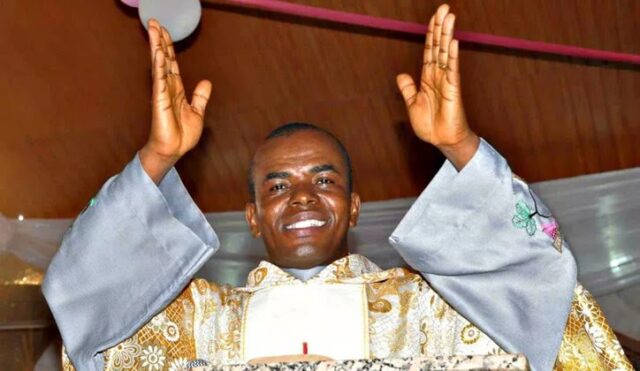 The Spiritual Director of the Adoration Ministry, Enugu, Rev. Fr. Ejike Mbaka, waited in vain for the Department of State Services to bring a formal invitation to him on Monday.

A source in the church added on Tuesday that the priest would not visit the office of the DSS until he received formal invitation.

Operatives of the DSS had on Thursday, June 3, stormed the Adoration Ministry to deliver a letter of invitation to Mbaka to come to Abuja for interrogation.

Although they did not meet the cleric, the operatives were asked to return on Monday to see him.

The PUNCH learnt on Tuesday that Mbaka waited for the security operatives on Monday, but they did not show up.

A priest, who was with him on that day, told our correspondent that Mbaka did not go out of his ministry ground, adding that he purposely waited to receive the invitation from the operatives.

“Fortunately, as of 6.30pm on Monday, we did not see anybody or letter. So as it is now, Fr Mbaka has not been served any letter of invitation from the DSS,” the source added.

The cleric recently stated that God had rejected the President and was unhappy with his leadership.

Mbaka, who resumed activities in his ministry on Sunday after a 30-day suspension order from his Bishop, Most Rev. Calistus Onaga, had flayed the DSS over the summons, saying “the mother church (Catholic church) is both a lamb and a lion.”

Also, reacting to the development, the Catholic Diocese of Enugu said it had yet to see the DSS letter summoning the priest.

The diocese Communications Director, Rev, Fr. Benjamin Achi, said, “The church will react if the DSS serves Fr. Mbaka the invitation letter or come to arrest him. He is our priest and it is our duty to protect him.

“He (Mbaka) waited yesterday (Monday), but he didn’t see anybody.”