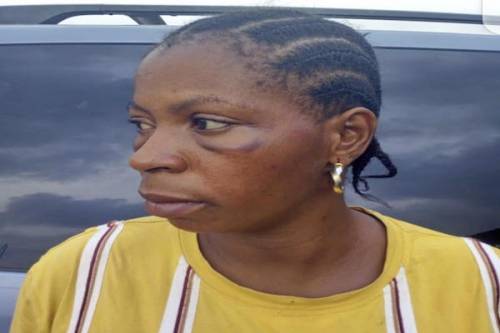 A widow, Mrs Fatimoh Olasupo, has accused some police officers attached to the Iju Division, in the Ifako-Ijaiye Local Government Area of Lagos State of assault, battery and theft of money running into about N54,000.

According to the woman who works as a chef in a hotel at Fagba area of Lagos, on April 1, 2021, at exactly 9:40pm, some men in mufti came into the hotel and demanded she should come with them.

“I thought they wanted to buy food and I told them food had finished, but to my surprise, one of the men grabbed me, and started beating me with the help of the others.

“As this beating was going on, the others came in wearing police T-shirts and shooting at the air, while everyone in the bar eating was arrested,” she said.

Olasupo added that after the beating, she was pushed into a bus with her two daughters – aged 14 and 20 – and that her bag of money which contained (N80,000.00) eighty thousand naira was taking from her while she was being beaten and thrown into a bus.

She alleged that she was pushed off the bus at the police station and that she fell on her chest. She added she was thereafter put behind the counter while all the men were put in the cell.

She continued, “I asked for my bag of money and my offence. Then one policewoman that invaded the hotel with her colleagues came and asked my 14-year-old daughter to follow her and get the bag, but when they returned with the bag, the policewoman was nowhere to be found and N54,000.00 (Fifty-four thousand naira) was missing from the money. The amount found in the bag was N26,000.00 (Twenty-six thousand naira).

“I demanded to have my money back, but there was no response from any of the officers. Rather, they were asking for money for bail for each person. They demanded N10,000.00 from each person as bail money and even said I would also pay for my two daughters separately.

“Almost immediately, a POS machine was made available and some arrested victims used their ATM card to pay for bail. But I could not pay because the officers had stolen N54, 000 from my bag. At this point, someone that knew the hotel manager came to bail me and my two daughters and the hotel manager with the sum of N25, 000.00 before we were released at exactly 2:40am.”

Meanwhile, a human rights group which visited Olasupo where she was receiving treatment, has called on the Lagos State Commissioner of Police to investigate the case and help the victim to recover her stolen money and also arrest the officers involved in the act.