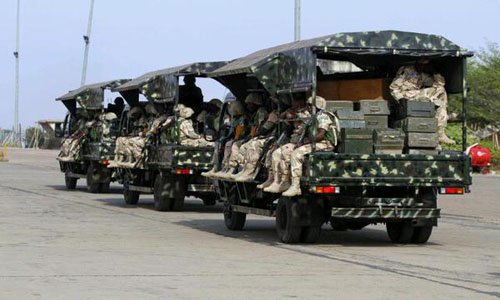 Nigerian forces on Friday, foiled the abduction of some students in Chikun Local Government Areas of Kaduna State.

The state Commissioner for Internal Security and Home Affairs, Mr. Samuel Aruwan, disclosed this in a statement on Friday.

The statement reads; “Security agencies reported to the Kaduna State Government that a planned abduction by armed bandits at a school (Prelude Comprehensive College) in Kujama area of Chikun LGA has been foiled.

“This followed receipt of credible intelligence, which prompted troops and Police operatives to mobilize to the targeted school to thwart the approaching bandits.

“The bandits were alerted of the presence of security operatives, and abandoned their plans to attack the school, diverting at the last minute to the Kaduna-Kachia Road between Kafari and Tashan Ice.

“At this location, they barricaded the road and abducted two citizens, Yusuf Alhassan and Nura Abdullahi. They abducted duo were later rescued after troops and police heard gunshots and gave the bandits a hot chase.”

It continued; “Sadly three travelers were shot and injured by the bandits. They are: Isa Ahmadu, Saidu Sani, Abubakar Ibrahim

“The injured persons were taken to St. Gerald Catholic Hospital for medical attention.

“In another development, troops foiled an attack along the Zaria-Kano road in Makarfi local government area.

“The personnel mobilized to the area following distress calls of bandit activity. One bandit dressed in military camouflage was neutralized, and one pump action gun was recovered.

“Receiving the reports, Governor Nasir El-Rufai commended the troops and Police operatives for decisive action in averting the planned abduction in Chikun LGA, for repelling the bandits at the secondary target, and rescuing two citizens. He also praised the troops for foiling the attack along the Zaria-Kano road.

“The Governor wished the injured citizens a speedy recovery,” it concluded.

Afemai Reporter - June 20, 2021
0
Governor Rotimi Akeredolu of Ondo State Governor has reacted to the comments made by Mr Jubrin Okutepa, the counsel to the state Chief Judge,...