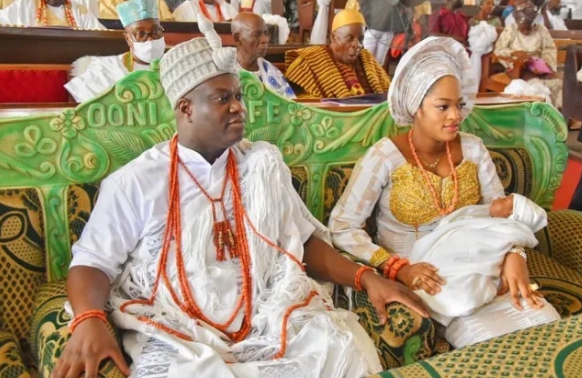 Olori Silekunola Naomi, the wife of the Ooni of Ife, Adeyeye Ogunwusi, has opened up about how challenging it was to conceive as a new bride and how societal pressure didn’t make it any easier.

She shared her struggles during an interview with the hosts of ‘Your View’, a popular talk show which airs on TVC in Lagos.

‘‘It was like I was supposed to start popping babies almost immediately. The whole world was just looking at me. Thank God for a supportive husband, he would always tell me not to bother. think it was something I was challenged with from the first day I got married,’’ she told the show hosts.

Olori Naomi, who is a prophetess, married the monarch in October 2018 and welcomed their son on November `18, 2020.

Although she isn’t a stranger to the limelight, the queen, who runs an interdenominational ministry based in Akure, Ondo State, maintained that being in the public glare made conceiving more challenging.

‘‘One thing that society does not yet know is that when a woman is under pressure, it becomes very difficult to conceive because it messes up with her brain and then it goes into her hormones and it becomes more difficult.

The more you abuse a woman about childbearing, the more it becomes difficult for her to conceive. For me, it was really difficult but thank God for God, thank God for the Holy Spirit, and thank God for my husband. There was no pressure at all from my husband’s family, they were all very supportive’’ she revealed.

When asked if she felt pressured regarding the gender of the baby, considering her position as the queen and the desire for a male child, she replied in the affirmative.

‘‘I would say from the public, there was a little bit of pressure but because my husband didn’t actually care about what gender, it could be a girl, a boy, or even twins he didn’t care. My mind was not on whether it was a girl or a boy, there was no reason to go for a scan, and there was no reason to find out what I was having. Whatever it is, I knew he was going to celebrate me and celebrate the child’’.

On submission, the young queen said she balances cultural expectation as the Olori and life as an empowered woman in today’s time by applying wisdom and diplomacy.

‘‘It is expected of me as a wife and as an Olori to submit to my king both culturally and scripturally. I uphold from both ends. I know when to stop, I know when to speak. You need to understand your rights first, so you know when it’s your place to talk and you know when you should let the man take the lead.

‘‘Only an abusive man will shut his woman down, especially because women hold a lot of grace. You just need to let the man feel like a partner in the business. It is more of a partnership. It is slavery when you think that a woman has to keep quiet or be dumb.

Speaking further, she said her childhood experiences have sort of prepared her for her current role as a young queen.

‘‘I started speaking publicly as a teenager and it is also important that you have the support of the people that you love and care about. My mother first started instilling confidence in me and when I got married, she handed it over to my husband, who would always clap for me and in fact, at some points give me monetary gifts to say well done, you did well.”

Asked to reveal something nobody knows about herself and the king, she said, ‘‘What I think people don’t actually know about Kabiyesi and about my relationship with him is the uniqueness of the relationship. Kabiyesi is quite understanding and behind all the royalty and the demand of the throne, we have our own safe place where we are just a man and his wife, all romantic, nice, and kind. He is also a wonderful father to his children.” 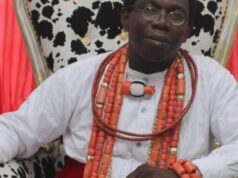 Oluship: Why Itsekiri With Yoruba Or Benin Mother Can Be Our King, By Egogo Of Warri Kingdom 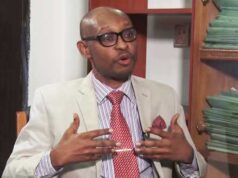 Nigeria Is Broke, Leaders Should Cut Down Spending – Onyekpere