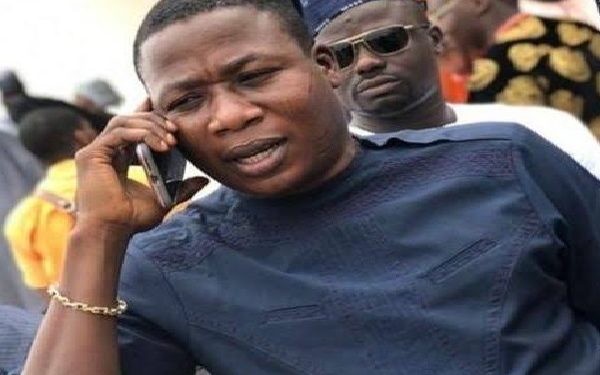 Self-acclaimed Yoruba freedom fighter, Sunday Adeyemo, aka Sunday Igboho, has said in a video that he cannot be intimidated or arrested by security agents in Nigeria.

Sunday Igboho was seen in the video boasting that if 1,000 policemen come to his house in Ibadan to arrest him, hardly 100 of them return to their base.

According to him, if a hundred of the 1,000 policemen manage to escape his judgment, it might be that they disappear spiritually.

Update: Mothers Of Abducted Baptist School Pupils Protest, Block Kaduna Road
His words: “If you want to arrest me, come. I live in Soka. Make sure you come with a net and wheelbarrow. And don’t come at night. If about 1,000 of you come at night, if 100 return, it means you use spiritual powers to disappear. I am not the type that can be intimidated by the police,” Sunday Igboho boasted in the video.

DAILY POST reports that security operatives invaded Sunday Igboho’s house in the early hours of Thursday, killing two of his aides in a gun duel.

The DSS later paraded 12 persons arrested at his residence in Soka, Ibadan, the Oyo State capital.

While Sunday Igboho was said to have escaped during the gun battle that lasted for an hour, the DSS advised him to surrender himself to any security agency.

About seven AK-47 assault rifles and three pump action guns were reportedly recovered from his house during the night raid.

But, Igboho denied being in possession of firearms and ammunition, saying he only protects himself with traditional powers.

Afemai Reporter - August 4, 2021
0
Five persons have been arrested in connection with the murder of popular Abuja-based celebrity chef, Emeka Eloagu, Punch reports. Eloagu was found dead in his...