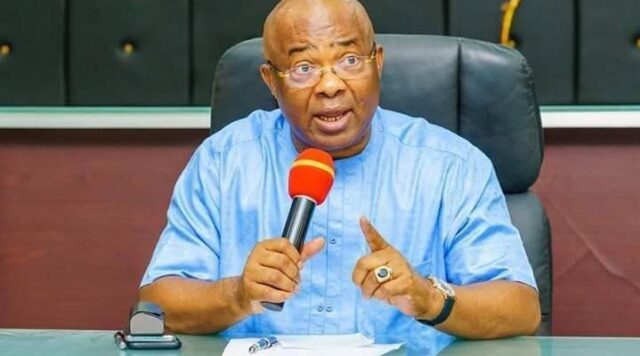 Uzodinma said that the ruling All Progressives Congress, APC, is looking for a president that would be for all Nigerians.

The governor dismissed reports that the ruling party is working to zone the 2023 presidential election ticket to the southeast zone.

Speaking in an interview with Channels Television on Friday, Uzodinma disclosed that the APC is not looking for an Igbo president in 2023.

The governor was responding to questions on if the APC would give its ticket to the southeast region as many people for the zone are clamouring for.

Nigeria News: Femi Adesina is one of the “urban bandits” in Buhari’s govt – Sheikh Gumi reveals
“We are not looking for an Igbo President. We are looking for a President of Nigeria,” Uzodinma said.

“We as a party APC believe what we are practising here is partisan democracy and every politician must be loyal to his party.

“At the end of the day, it is the decision of the party that you belong to that will matter.”

With the President Muhammadu Buhari administration expected to elapse in about 17 months from now, there has been uncertainty as to which zone would produce the presidency.

While the southern region has been agitating to have the presidential slot, none of the nation’s two dominant parties – All Progressives Congress (APC) and the Peoples Democratic Party (PDP) – has officially given the slot to the zone.

Newsflash Nigeria had earlier reported that Ebonyi State Governor and the chairman of the Southeast Governors’ Forum, Dave Umahi, had said that the chances of the South East producing Nigeria’s next president in 2023 lies in the hands of God.

However, Umahi who decamped from the main opposition PDP to the ruling APC last year, said the chances of the South-East region producing Nigeria’s President under his party, would be determined by God.

Asked if Igbos would be allowed to pick the presidential ticket, Umahi: “It’s in the hands of God