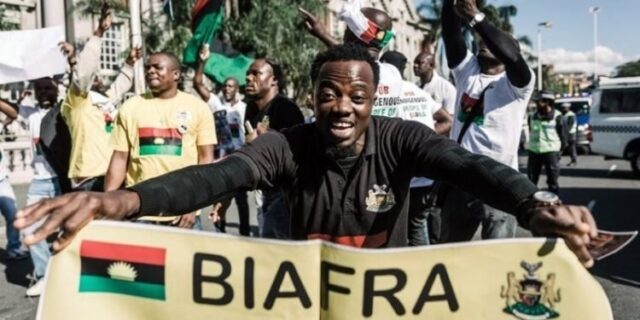 The Indigenous People of Biafra, on Tuesday, said this year’s sit-at-home will hold on Monday, May 31, and not Sunday, May 30, 2021, as it earlier announced.

The modification, according to IPOB, was due to genuine observations about its earlier directive “as many of our people observe Sundays as a day of worship”.

It, however, added that all commercial activities will be shut down on May 31, 2021, throughout Biafraland.

The group stated this in a statement signed by its Director of Media and Publicity, Emma Powerful, a copy of which was made available to The PUNCH.

The statement read, “We, the Indigenous People of Biafra ably led by our great and indomitable leader, Mazi Nnamdi Kanu, wish to announce that this year’s Biafra remembrance day sit-at-home will now hold on Monday, May 31, and not Sunday, May 30 as earlier directed. The modification is following genuine observations about our earlier directive as many of our people observe Sundays as a day of worship.

“There will be a partial observation of the Biafra Day on May 30th. But there will be a total lockdown and sit-at-home on Monday 31st of May.

“We, therefore, expect Biafrans all over the world to stay indoors on May 31 for the respect and honour of our fallen heroes and heroines who paid the supreme price for us to live. It is our right to remember them for defending the genocidal attacks given to our people between 1967 and 1970 by Fulani Jihadists supported by the British government.

“In the same vein, artisans and traders must close shop on that day. Airports, seaports, banks, and financial institutions should all shut down in honour of our fallen heroes and heroines.

“Okada and tricycle organisations are also advised to withdraw from roads on that day. There shall be no social gatherings or events including burials, weddings on that day from 6 am to 6 pm.

“Parents are advised not to send their children to school on that day as no one is expected to be seen outside. Full compliance is expected from all.

“Biafrans in the diaspora are to hold peaceful rallies in their countries of abode.”