Recent reports have alleged that the man in sex tape with Tiwa Savage has allegedly called off their relationship.

Blogger, Cutiejulz who made the allegation via Instagram, claimed that Tiwa Savage who packed 30 shoes to go on vacation with her rumoured lover, broke down in tears after he ended the relationship abruptly.

AfemaiReporters recall that Tiwa Savage had in an interview disclosed that someone was blackmailing her with a sex tape of her and the man she’s currently dating.

She, however, refused to be blackmailed for something she termed natural. Tiwa Savage mentioned that the sex tape was mistakenly posted by her man but deleted minutes later.

This generated mixed comments online, with some fans accusing her of being irresponsible, while others suggested that her disclosure of the sex tape was a publicity stunt.

“Shey Una remember our famous tape in which your favourites were standing with “Queen” up and down abi? 😩😩😩 Omo if you have red cloth and you be woman wey stand with “Queen” that time, abeg let’s meet now now with “WE NO GO GREE” placards.

Abeg this breakfast don enter Aunty wella. She purposely went to Ghana to visit boo only for boo to settle with youngie who is at very close range 😩😩😩 Chai! This thing pain me sha.. 😩🤦‍♀️” SEE THIER PHOTO BELOW 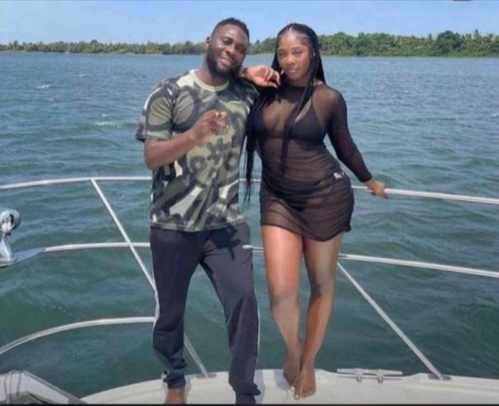