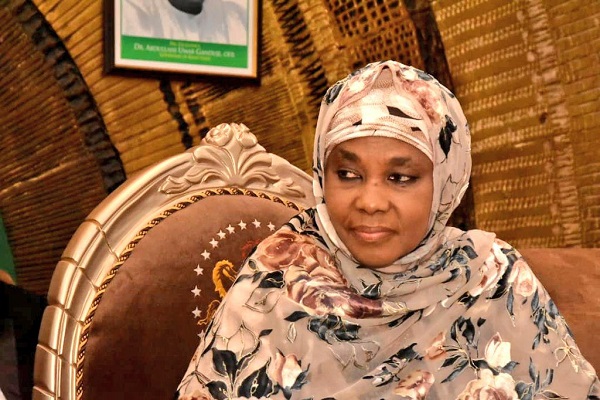 Kano State Government has debunked reports that the Kano State Governor’s wife Prof. Hafsat Ganduje has been arrested by the Economic and Financial Crimes Commission (EFCC).

Commissioner for information Malam Muhammad Garba, in a statement, described the reports as “mere rumours being peddled by mischief makers”.

He said the reports were evil calculations aimed at mischievously defaming, not only the character and integrity of Prof. Hafsat, but the integrity of Governor Abdullahi Ganduje.

Garba urged the general public to “disregard the information”.

Read Also: Akunyili: Suspects arrested as police hunt arsonists in Anambra
“Most unfortunately, the fake story is being peddled on social media platforms without confirmation from either the government or the EFCC.

“The governor’s wife has not been arrested or detained and she is presently discharging her responsibilities,” the commissioner said.

Online news platforms had published reports that the EFCC arrested the governor’s wife on Sunday.

The reports suggested that the governor’s wife was arrested over alleged involvement in fraud.