Former Aviation Minister, Femi Fani-Kayode, on Sunday, caused a stir online after he snubbed his embattled estranged wife, Precious Chikwendu, while posting photos of his other baby mamas/ex-wives on the occasion of the Mothers Day celebration.

IDOMA VOICE recalls that the former couple have been in a legal and verbal battle since their marriage hit the rock last year.

God bless you both for being such wonderful mothers to our beautiful children. Without you both where would we be today?

You are both such a blessing and I want to take this opportunity to thank you for everything. ❤❤❤💣💣💣💥💥💥💖💖💖

The post led to sharp criticisms from some fans who took to the comment section to expressed their disappointment over his deliberate decision to snub Precious who is the mother of his four sons in his mothers day message.

See some of the comments below:

The same sons you are using to pose up and down now, exposing them to your politicians “brothers” and “bridge builders”.

Ginikanwa Ogbuefi wrote; “Happy MOTHER’S day to your wives especially precious who gave handsome boys that will make you proud in life. If had it been these other women were the best, why did you marry precious who went through the pain of IVF just to conceive boys for you?”

Chinelo Catherine wrote; “Happy mother’s day to Precious. Mama Aragon and Triplets . You shall live to see your grand children.” 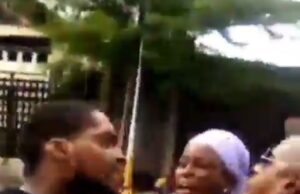 Afemai Reporter - April 20, 2021
0
Policeman gets assaulted multiple times by a traffic offender who threatened to beat the officer for harassing him after driving one-way. A video making rounds...