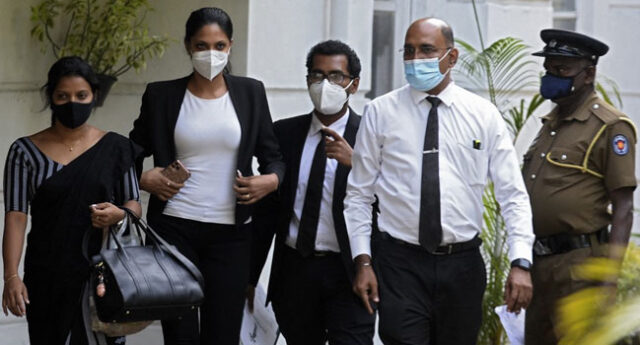 Former Mrs. Sri Lanka 2019 and current Miss World Caroline Jurie (2L) leaves Cinnamon Gardens Police Station after being released on bail in Colombo on April 8, 2021, following her arrest on charges of assault over an on-stage fracas in which she pulled the crown off the head of the new “Mrs Sri Lanka”. PHOTO: LAKRUWAN WANNIARACHCHI / AFP

Colombo police on Thursday arrested the current “Mrs World” on charges of assault over an on-stage fracas in which she pulled the crown off the head of the new “Mrs Sri Lanka”.

Caroline Jurie yanked the crown off Pushpika de Silva minutes after she was declared “Mrs Sri Lanka 2020” in a Sunday gala at Colombo’s Nelum Pokuna theatre.

Jurie was the previous year’s “Mrs Sri Lanka” and had gone on to win the “Mrs World” competition organised by a California-based company.

De Silva needed hospital treatment after the incident, seen by stunned spectators in a packed venue as well as a live social media audience.

“We have arrested Jurie and (her associate) Chula Manamendra in connection with a charge of assault and causing damage to Nelum Pokuna (theatre),” senior police official Ajith Rohana said.

De Silva told reporters outside a police station in Colombo Thursday that she was ready to drop the charges if Jurie made a public apology, but she had refused.

“I tried to end this out of court, but she has refused,” de Silva said. “I can forgive, but not forget.”

Police said a court hearing was fixed for April 19 and Jurie and her associate who crashed the stage on Sunday were released on bail Thursday.

Neither of them nor their lawyers spoke to reporters outside the police station.

Towards the end of Sunday’s ceremony, Jurie had claimed that de Silva was divorced and therefore ineligible for the prize. Her surprise announcement sparked unruly scenes minutes after the chief guest, Prime Minister Mahinda Rajapaksa’s wife Shiranthi, had left the theatre.

To qualify for the title, contestants must be married. De Silva is estranged from her husband, but they are still legally married.

The local franchise holder for the pageant, Chandimal Jayasinghe, said they were “deeply disturbed and sincerely regret” the behaviour of Jurie.

Jayasinghe said they were claiming compensation from Jurie for damages to the stage and backstage dressing rooms where several mirrors had been smashed.

The rumpus also meant the event dragged on two hours longer and theatre management demanded an additional fee of half a million rupees ($2,500), Jayasinghe added.

Jurie has also been accused by organisers of bringing disrepute to the event.

Social media calls have been mounting to strip Jurie of her “Mrs World” title, with one meme calling for her to be rebranded as “Mrs Under World”. 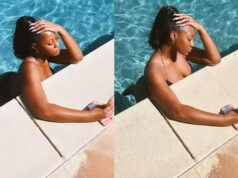 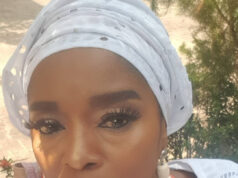