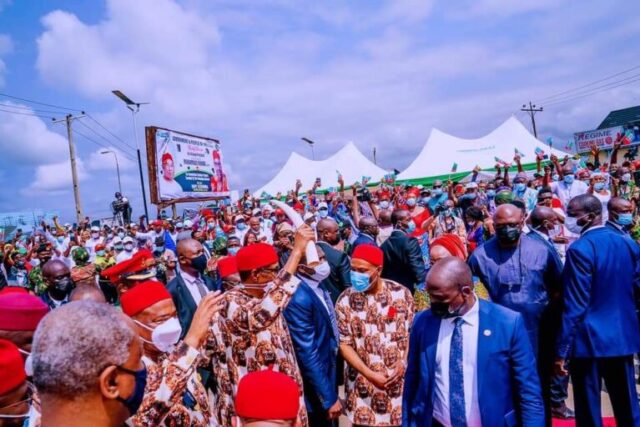 The Abuja based Human rights activist and the convener of an advocacy group, Concerned Nigerians, Deji Adeyanju, has revealed that only 83 people welcomed President Muhammadu Buhari to commission gutter in Imo State after budgeted N700m for the event.

The activist said the Indigenous People of Biafra (IPOB) communicated the language that President Buhari understands during a day visit to Imo State.

Newsflash Nigeria had reported President Buhari arrived at the Sam Mbakwe International Cargo Airport in Owerri, Imo State on Thursday morning around 9:00 am.

The President who was clothed in the Isi Agu Igbo native attire was welcomed by some of the elders in the state but the streets deserted.

Recall that the leader of IPOB, Nnamdi Kanu had directed the people of the state from the detention to stay indoors to prevent them from welcoming the president to the state.

Newsflash Nigeria gathered that residents of Owerri, the state capital complied fully with the directive initially given by the IPOB leader.

Reacting, Deji Adeyanju commended the residents of the state for complying with the sit-at-home directive of the IPOB, in protest against the visit of President Buhari to the state.

Adeyanju on his Facebook page stated that it was obvious that IPOB and the citizens of Imo state who complied with the Sit-at-home order, spoke to President Muhammadu Buhari in the “language he understands”.

Politics Update: Court rejects Secondus allies to stop PDP National convention
He added that despite the heavy security agents deployed to the state, Buhari hurriedly inaugurated a road project and left the street because of fear of the unknown.

He said IPOB only asked for a sit-at-home but was given a lockdown instead.

Adeyanju said he counted himself that only 83 people welcomed Buhari for commissioning gutter in Imo State after budgeted N700m for the event.

He said all the videos and pictures posted on Social media by Presidential aides, only 83 people welcomed Buhari aside from the military and security agents when he counted.

“Only 83 people welcomed Buhari to Imo State to commission gutter after they budgeted N700m for the event aside the military and security agents.

“I counted the 83 people myself in all videos and pictures posted. And I dare to say these are Imo State Govt officials.

“IPOB really communicated to Buhari in the language he understands,” he said.

Earlier reports showed that residents of the state obeyed the order by staying indoors, while business activities were grounded.

The streets were also deserted during President Buhari’s visit to the state.

Adeyanju further mocked Buhari saying what happened in Imo State was a message to him that he had already lost popularity in the state.

Adeyanju wrote: “IPOB communicating to Buhari in the language he understands. It’s a ghost town.

“Even with the massive deployment of military, they hurriedly commissioned the project and left the street.

“The road Supreme Court Governor told Buhari to the commission was 90% completed by Emeka Ihedioha.

“With what Buhari has seen today in Imo, I hope when next Supreme Court Governor goes to Aso Rock to lie to him that he is in charge of the state, he will just laugh.

“How Uzodinma will even campaign round Imo State for re-election will be a miracle.

“Imo people are wicked. LOL! It was supposed to be a Sit-At-Home but they turned it to Lockdown. Buhari was completely disgraced.

“The lockdown of Imo State today shocked even BBC Igbo. They had to go look for the old #EndSARS picture to add for Buhari. Although they have now apologised for this, E Choke.”

Recall that on Tuesday, June 1, Buhari spoke about the civil war experience and threatened to deal with secession agitators “bent on destroying” Nigeria through “insurrection” and treat them in the language they understand.

“Those of us in the fields for 30 months, who went through the war, will treat them in the language they understand,” he had said.