Falana said this during a chat with The PUNCH shortly after the Federal Government announced that it had suspended Twitter indefinitely.

The human rights lawyer argued that the suspension is also at variance with the Freedom of Information Act which seeks to expand information and access to it.

The senior advocate said he was sure that Buhari’s regime would soon ban international news networks like CNN, BBC and Al Jazeera.

Falana said, “This act has confirmed the suspension of Chapter IV of the constitution. Very soon, Nigerians will be restricted to NTA and the FRCN as the only source of information. Media like Channels TV and others have been fined for embarrassing the government and they may be proscribed soon.

“The decision of the NBC to impose fines on media houses based on an illegally amended code of the Broadcasting Code. It is a rehearsal of the imminent proscription of local media organisations that publish anything considered defamatory or seditious by the government.

“With what has happened to Twitter, other media houses like CNN, BBC and Al Jazeera will also be suspended.” 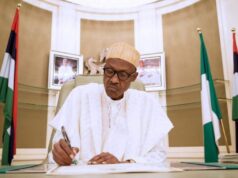 Afemai Reporter - June 15, 2021
0
Governor Nyesom Wike of Rivers State has called on President Muhammadu Buhari to live up to his constitutional duty of securing the country. Wike said...