The crisis of the South-West Peoples Democratic Party (PDP) deepens as the factions loyal to the Oyo State governor, Seyi Makinde and a former governor of Ekiti State, Ayo Fayose, have called a zonal caucus meeting of the party at different venues.

The two factions made their announcement of zonal caucus meeting on Monday as the meeting is to brief stakeholders on the modalities for the zonal congress of the party scheduled to hold in Ibadan, on Saturday, March 6 but the venue of the congress at a yet-to-be-determined.

While the Makinde faction is meeting at the Agodi Government House in Ibadan, the Oyo State capital, Fayose and his group are holding a parallel zonal meeting at a hotel in Ikeja, Lagos.

The Ibadan caucus meeting was called by the zonal caretaker chairman, Dayo Ogungbenro, who was nominated by Governor Makinde into the zonal executive of the party, while Honourable Daisi Akiitan, the zonal secretary, called the Lagos meeting.

The investigation revealed that the two factions, which have refused to shift grounds on their positions concerning the running of the party in the zone, may hold a parallel zonal congress on Saturday.

The group loyal to Fayose is backing the return Eddy Olafeso, who resigned to contest the party’s governorship election primaries in Ondo State, but lost the ticket to Eyitayo Jegede SAN, as the new zonal chairman of the party.

But according to the Makinde faction, the position of the zonal chairman was zoned to Oyo State at a stakeholders’ meeting of November 22, 2020, held in Ibadan, and Makinde, as the party’s leader, will nominate a candidate from Oyo for the position.

It learnt that a former Deputy Governor and former Ambassador to Jordan, Ambassador Taofeek Arapaja, has been endorsed by Governor Makinde to run as the zonal chairman of the party.

About 600 delegates are going to elect new executives of the party on Saturday in Ibadan at a yet-to-be-determined venue.

A peace parley slated for Ibadan about two weeks ago, with the Rivers State governor, Nyesome Wike drafted in as mediator, was called off as the Fayose group did not attended the meeting.

The zonal caretaker chairman, Ogungbenro, while confirming the Ibadan meeting said that anyone who goes elsewhere for a different meeting is on “a voyage of futility.”

“We are going ahead with the meeting tomorrow. I am the only competent personality who can call a South-West caucus meeting as the sitting caretaker chairman.

“Akiitan or whosoever has no constitutional right to call any other meeting. Whatever is done at such a meeting is a nullity because the PDP constitution makes it clear that Ibadan is the South West zonal headquarters. We are not breaching any law by holding ours in Ibadan.

“We expect everybody in Ibadan tomorrow [today], but if anybody goes on a voyage of futility, that is their own problem. Nothing is ambiguous about the provisions of party’s constitution,” he said.

On the crisis pointing to the likelihood of the party collapsing in the zone, Ogungbenro said “I am not a prophet of doom and I cannot say the crisis sin my party will not end, particularly as the sitting caretaker chairman.

“In Political Science, war in itself is a means of finding peace because after the war, we will sit at a round table to discuss. Politics, for us, should be conducted in a civilized manner.

“Majority of Nigerians are waiting for the PDP because the All Progressives Congress (APC) is clueless. We have tried so much. There was never a meeting we ever called without engaging the support of Fayose and his group,” he said.

However, the zonal secretary, Akiitan said Ogungbenro has no locus to speak as the zonal caretaker chairman because he was suspended last year following dereliction of duty.

“He was appointed chairman and in the last six months he did not call a single meeting. He is now calling a caucus meeting. He has been removed as zonal chairman. Time will tell which meeting is illegal and which one is real. We have been functioning as executive without him and with dispatch.

On the zoning of chairmanship to Oyo, he said “Is that how to run a party? Won’t all the stakeholders be present where things are zoned? We don’t run PDP like that. We agree the governor is a leader, but there are other leaders and stakeholders. Is he doing it in conjunction with other leaders in other states?

“The party will do the needful. If anybody does a parallel congress, there must be some reason for it. Politics is a game of interest. It does not amount to crisis,” he said.

Another stakeholder in the party described Ogungbenro as a kindergarten politician as far as PDP politics is concerned.

“They have to mature and play politics the way it should be played. Politics is not played unilaterally. It is about inclusion. At the appropriate time they will understand it is not a child’s play. The train, as far as we are concerned, has left the station,” he said. 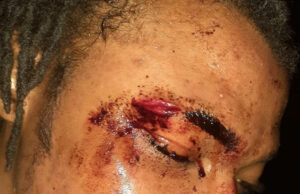 Afemai Reporter - March 3, 2021
0
A content creator/makeup artist has cried out after he was attacked by men in police uniforms with ID cards.   He claimed he was on his...