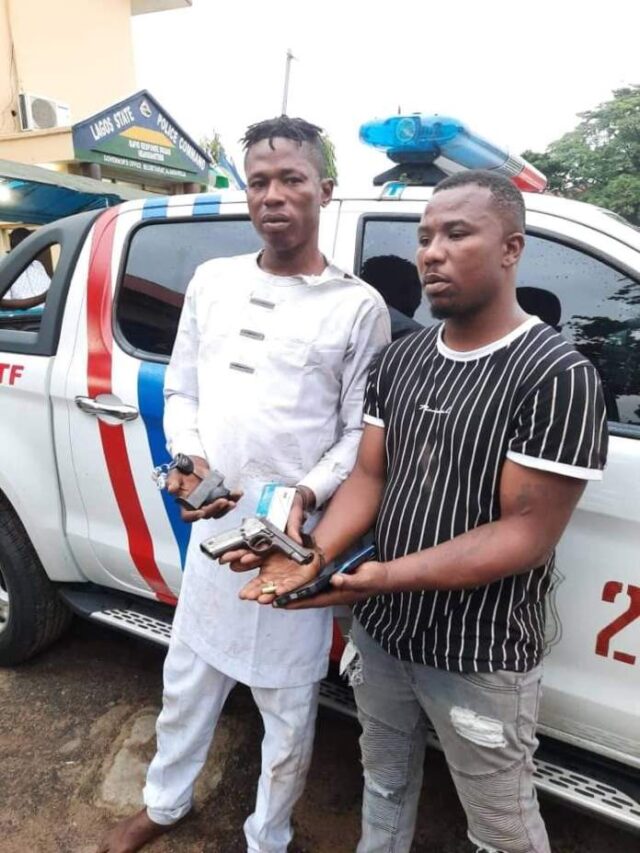 Two members of a 3 – man robbery gang, Muhammed Bello (21) and Babagana Modu (25) were arrested in a foiled robbery attempt by operatives of the Rapid Response Squad (RRS) Lagos.

The incident is reported to have happened on Friday night, October 1st after the suspects robbed a lady around 10:30 p.m. at Oniru Estate, Victoria Island.

The victim’s screams attracted the RRS officers who were on routine patrol of the area; the officers chased and apprehended two of the criminals, who attempted to escape on a motorbike.

Recovered from the robbers were; a TVS motorbike with registration number, KFS 704 QW, a long knife, a police camouflage fez cap, an android phone and sums of cash belonging to the victim.

The suspects were apprehended by police operatives inside a Lexus Jeep (LSD 666 GK) and confessed to belong to a 3-man robbery gang that specializes in snatching vehicles and robbing innocent motorists during traffic across Lagos.

The police recovered a locally-made gun with 2 rounds of ammunition and ATM cards consisting of Eco & Access Bank from them.