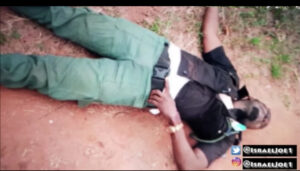 A police officer simply identified as Inspector Peter, alleged to have framed up Comrade Isreal Joe by forcing a confessional statement from a suspect has paid the supreme price in the line of duty.

Focus Naija can report that he was allegedly shot and killed at Issele-Azagba by armed robbers last month.

As disclosed in a circulating video shared by Comrade Isreal Joe, the late cop during a phone conversation admitted taking the statement from the suspect and sending it to ‘Oga’ that ordered it to frame the activist.

According to him, he deleted it thereafter, made peace with the activist who even attended his birthday celebration and declared it open.

The suspect, Ovoke David was made to soil the image of Comrade Israel Joe by confessing that he is an Internet fraudster and a human right activist.

Although Ovoke David later debunked the statement even as the late cop pleaded for forgiveness before his demise, Comrade Isreal Joe was accused of introducing the suspect to “human rights” where he paid twenty thousand naira as registration fee plus an additional thirty thousand naira to the exco committee.

When asked how he met Isreal Joe, the suspect said to have spoken under duress disclosed that his elder brother(name not mentioned) introduced him to Isreal Joe after policemen attached to the Ekpan Police Station arrested him.