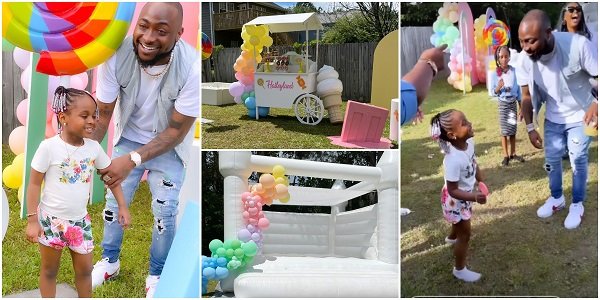 Social media users have reacted to a viral video of 30billion gang boss, Davido scolding his second daughter, Hailey Veronica Adeleke, who tried to twerk on her 4th birthday party in Atlanta, USA on Sunday, 9th May.

Davido and second baby mama, Amanda, through the service of an event planner threw a grand Hailey-Land birthday party for her.

The doting dad, Davido, has been in the news lately from announcing his son, Ifeanyi Adeleke as his heir apparent to gifting a brand new SUV Range Rover to his first daughter, Aurora Image Adeleke on her 6th birthday and to celebrating his 10th anniversary on stage as a performing artiste.

Davido, who has been in Atlanta for a couple of days, attended his daughter’s birthday in the company of some members of his 30BG crew.

Little Hailey Adeleke, in a viral video, was seen dancing and tried to do the twerk dance when her father, Davido stretched out his hand and tapped her lightly as a way of telling her not to dance that way.

This act has got social media users expressing several opinions.o

Some said a good father will always protect his child from acting cheaply.

Others said ladies should take a cue from this video as the singer knows such is wrong yet they get females to do the dance in their videos.

A few others have just enjoyed the video and merely laughed over Davido’s reaction of seeing his little daughter trying to do the silly dance move.

@euniceokwari tweeted: “Moral lessons 1. No parent is proud of their children exposing boobs and Butts 2. Every parent wants the best for their children irrespective of Gender.”

@CRawkeen said: “I saw the video where Davido’s daughter Hailey was trying to twerk and he quickly cautioned her “hey don’t do that, don’t do that, that is for àwọn ọmọ wobe not for good girls”

It’s sweet to watch other people’s daughter twerk but not your own child.”

@iconic_remi stated: “Man wants to raise a queen not a bitch.”

@Chigbo_Uchenna tweeted: “He doesn’t want his daughter to do but pay other people’s daughters to do that even with half-naked pictures tell me again this life balance?”

@one_dosh said: “What Davido did to his daughter is amazing, teach your daughters good morals. Hailey will surely learn from the best.”

@Adeyipeter1 tweeted: “Of course she’s not yet of age to do so. I’m not sure he would react the same if his daughter is 20+.”

@ITukura tweeted: “But his got bitches twerking for him.”

@cruze_ng said: “It’s good to see he still has some moral to give to his kids. Some will say but other people’s daughters are tweeting on your music but he didn’t force them and when his child is up to age, she can choose what she wants but for now! Let’s train them well.”

@BarbaraEdet stated: “This is so funny @davido didn’t experienced it.”