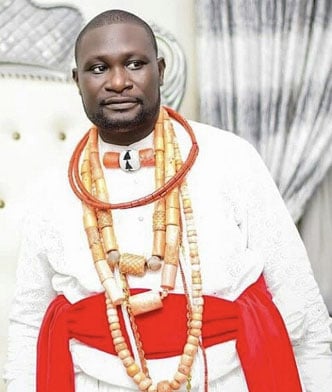 This was quickly followed by an invitation to the Ologbotsere family to appear before the Olu of Warri, where the monarch instructed members of the family never to address Ayiri Emami by the title anymore or risk being punished.

In order not to create a vacuum, the Olu of Warri immediately appointed Pa. Higson Ajofotan Oporokun, the Olori-Ebi of the Ologbotsere family to take over the title and he was thereafter empowered to superintend over all activities of members henceforth.

Before being stripped of his prime minister title, Ayiri Emami was on a few months suspension for his condescending attitude towards the Olu of Warri before his coronation, and many knew that its was only a matter of time before the monarch wielded the big stick.

Ayiri’s sins are two fold. The businessman mounted stiff opposition to the emergence of the monarch, insisting that he was not qualified to ascend the throne of his fathers due to his maternal heritage.

First, he tore into shreds the nomination paper of the Olu of Warri presented to him by the kingmakers. This was considered a great affront to the kingmakers and Emiko himself who kept his anger to himself.

The formal proclamation of Emiko as the successor to the throne was made at Ode-Itsekiri on 5 April 2021, the same day the passage of his predecessor, Ogiame Ikenwoli, was announced.

Emiko’s reportedly emergence came “after a rigorous process, which included a painstaking search within and among the descendants of the last three Olus as required by tradition, custom and extant laws.”

Secondly, he made a beeline for Warri High court to challenge the Thursday 27 May 2021 press conference announcement of the date of installation of Emiko as the next Olu.

Emami was seeking legal interpretation of the amended 1979 Olu of Warri Chieftaincy Edict which says that the Olu must have both Benin and Warri blood flowing in him. Emiko’s mother however, is Yoruba – Olori Gladys Emiko (wife of Olu Atuwatse II, Emiko’s father).

Ayiri sought the court’s order of an interlocutory injunction to “restrain the defendants either by themselves, agents, privies and/or whomsoever from crowning any person as the Olu of Warri Kingdom, pending the hearing and determination of the suit.

The Ologbotsere wanted “an order restraining the defendants either by themselves, agents, privies and (or) by whomsoever from using anybody, particularly the third defendant (Iyatsere) or the Uwangue or any other traditional chief of Warri Kingdom to crown any person as the Olu of Warri Kingdom against the provision of the Traditional Rulers and Chiefs Edict of 1979, pending the hearing and determination of this suit”.

He was also seeking the court to “upturn the purported suspension of Ologbotsere as the Chairman, Olu Advisory Council and Traditional Council of Chiefs by the Ginuwa I Ruling House.”

Reacting to the Olu of Warri’s decision to disrobe him, Ayiri said the pronouncement of the Olu is not binding on him as he does not recognise his authority because the case he instituted against monarch is in court.