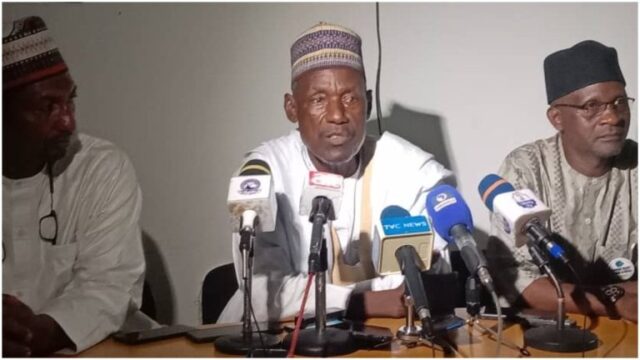 The Miyetti Allah in Katsina State has joined its National Body to distance itself from the recent unguarded outburst credited to its National Secretary, Saleh Alhassan.

At a press briefing held at the NUJ Secretariat on Friday, the state chairman Miyetti Allah, Hassan Kuraye, condemned the unguarded derogatory statement of the National Secretary, saying it does not in any way reflect the view of the association at both the national and state chapter.

The Chairman of Miyetti Allah in the state, Kuraye, said the National Chairman and all its executive members will be visiting the state soon to appeal and seek the Governor’s forgiveness over the derogatory remarks.

Kuraye also claims the National Secretary must be regretting his utterances.

“We request to have your indulgence this morning to make some issue clear as far as the relationship between Miyetti Allah Hore and the Katsina Government is concerned.

“One of us, the national secretary of Miyetti Allah, cattle Hore, Alhassan Saleh, made some negative utterances against His Excellency, the Executive Governor of Katsina State, Aminu Masari, which were found so heavy to the entire Fulani race across the landscape of Nigeria.

As such, we felt it will be important for us to make ourselves clear on those utterances. He made the utterances on his own and he is standing alone as far as we are concerned.

We are pleading with the Executive Governor of Katsina State Rt. Hon. Aminu Bello Masari to please forgive and forget those utterances because we are law-abiding citizens of this country. Miyetti Allah cattle Hore is a registered and law-abiding association.

“The National Chairman of Miyetti Allah Hore is coming to Katsina personally with his Executives to plead with His Excellency to forgive and forget those negative utterances for us to continue to forge ahead, to continue to make some progress.

“In a nutshell, we are here to say that the utterances made by our national secretary are not good. At least by the age of His Excellency and the position he is occupying, he deserves some respect so that the successes we have been recording, from the inception of this administration will continue to thrive and more progress would be made,” Kuraye disclosed.

Recall that Alhassan Saleh recently in an interview painted the Katsina Governor in derogatory terms for daring to label the Fulani’s as primarily responsible for banditry in the North.

Saleh was reportedly quoted to have said:

“Did you take that drunkard serious? My governor, do you take him seriously? Can’t you see that he is already tired? Records should come from security operatives not from a confused human being.

“All of them talking, they are stealing security votes, they should find solutions, create ranches for these herders and accommodate them.

“Which people do you find along the Sahel Sahara desert? They are many tribes, is it by a physique that you now identify a Fulani man? The bandits are criminals, why should you attach tribe to it,? That’s why we are not happy. You don’t need to attach a tribe because it will affect innocent persons.

“Forget that man, that man is the worst Governor Katsina has had; we are just praying for his time to lapse.” Saleh Hassan had said.