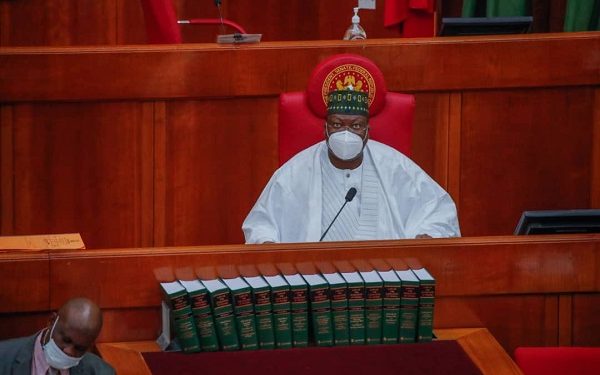 Ahmad Lawan, the President of the Senate and six other prominent Nigerians are to be conferred with the chieftaincy title of Iyin Ekiti.

The Oluyin of Iyin Ekiti, Oba Adeola Adeniyi Ajakaiye said the conferment of the chieftaincy title was part of activities marking his first year coronation anniversary.

Others to be honoured by the monarch are, an indigene of the town and former Director-General, National Youth Service Corps, Major Gen. Johnson Bamidele Olawumi and wife, an Israeli, Him Hille and wife, Engineer Ayodeji Adeosun and Bar. Veronica Safia Ndanusa.

Addressing journalists in his palace ahead of the weeklong anniversary which commences on Monday 13, 2021, Oba Ajakaiye said titles was in recognition of their contribution to the community and the country at large.

The traditional ruler who spoke alongside the Secretary of the Oluyin in Council, Opeyemi Arije noted that the town has witnessed tremendous peace and development in the last year of his reign.

Arije who doubles as the Secretary to the local organising committee of the anniversary said, ” We are witnessing new dimensions to Obaship in our town”.

“Kabiyesi has given a facelift to the palace by providing an office for Oluyin in Council and mini-conference hall.

“He also facilitated and commissioned five motorized boreholes donated by indigenes, support for the creation of LCDA and equipping its Secretariat as well as ensuring that the only bank in the town 6 months was reopened after it was attacked by armed robbers”