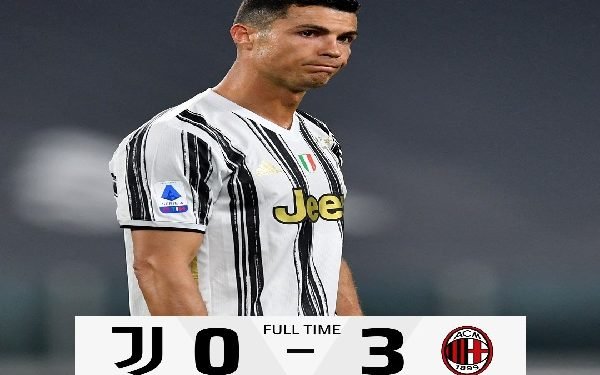 Juventus dropped out of the top four in Serie A after suffering a 3-0 loss at the hands of AC Milan, who moved up to third on Sunday night.

The sides were cautious in the opening exchanges but Diaz had a chance to give Rossoneri the lead in the 18th minute after a through ball by Hakan Calhanoglu set him free around the penalty area but he sliced his shot just over the bar.

Chiellini had a wonderful chance to break the deadlock for Andrea Pirlo’s charges on the half-hour mark after a cross by Juan Cuadrado looped over goalkeeper Gianluigi Donnarumma towards the back post but his header missed just wide, with the net gaping.

Diaz eventually broke the deadlock for Milan on the stroke of half-time with a curling strike into the roof of the net after latching onto a rebound from a free-kick at the far post and dribbled past a crowded area.

ADVERTISEMENT
The game was opening up coming from the break and Stefano Pioli’s charges had a big chance to double their lead on the hour-mark after they were awarded a penalty for a handball by Chiellini following a Video Assistant Referee (VAR) review.

However, Franck Kessy could not capitalise, as his side-footed shot from the spot-kick was saved by shot-stopper Wojciech Szczesny.

Pioli was forced into a change in the 66th minute as Zlatan Ibrahimovic went down with injury and was replaced by Ante Rebic while Pirlo made an attacking change as Dejan Kulusevski replaced Rodrigo Bentancur.

Rebic finally doubled the lead for Milan 12 minutes before time with a curling strike into the top corner after he was given a lot of space on the edge of the box.

Fikayo Tomori put the game to bed for Rossoneri in the last eight minutes with an header into the top corner, as Milan went up to third on the log while Bianconeri dropped down to fifth.