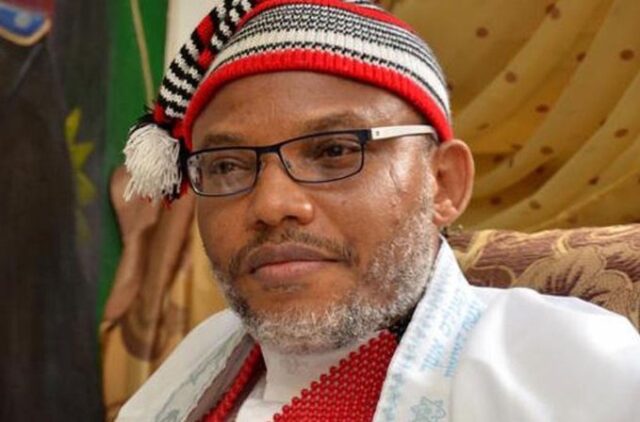 The leader of the Indigenous People of Biafra (IPOB), Nnamdi Kanu, has been re-arrested and brought back to Nigeria to face his trial, The Nation reports.

The Attorney General and Minister of Justice, Abubakar Malami said “Self-acclaimed leader of the proscribed secessionist Indigenous People of Biafra (IPOB), Nnamdi Kanu, has been intercepted through the collaborative efforts of Nigerian intelligence and Security Services.

“He has been brought back to Nigeria, in order to continue facing trial after disappearing, while on bail regarding 11 count charges against him.

“Kanu was also accused of instigating violence especially in Southeastern Nigeria that resulted in the loss of lives and property of civilians, military, para-military, police forces and destruction of civil institutions and symbols of authorities.”

Here is a timeline of Kanu’s arrest and trial;
October 14, 2015 — Kanu was arrested in Lagos, and was detained for more than a year.

He was arraigned by the Federal Government on an 11-count charge bordering on terrorism and treasonable felony.

November 23, 2015 — Kanu was arraigned at the Abuja Magistrate Court for charges of “criminal conspiracy, intimidation and membership of an illegal organisation” by the Department of State Services (DSS).

April 28, 2017 — Kanu was released from detention on bail. He was granted bail by Justice Binta Nyako of the Federal High Court, Abuja.

March 28, 2019 — Justice Binta Nyako revoked the bail that was granted to Kanu on health grounds and issued a bench warrant for his arrest.

disappeared from public radar after his home was raided by the military.

He reportedly fled the country after the invasion of his home in Afara-Ukwu near Umuahia, Abia State, during military’s ‘Operation Python Dance II’ staged to quell agitation for Biafra Republic in September 2017.

September 20, 2017 — The federal government obtained a court order on to designate IPOB a terrorist group and to proscribe it.

February 19, 2018 — The Federal High Court in Abuja ordered that Kanu, be separately tried from the rest of his co-defendants.

November 26, 2020 — A Federal High Court in Abuja commenced Kanu’s trial, in his absence. Five prosecution witnesses were provided to testify against Kanu.

January 27, 2021 — The Federal High Court Abuja continued the trial of Kanu. The matter was initially fixed for hearing on Nov. 26, but when it was called, both Kanu and his counsel, Mr Ifeanyi Ejiofor were absent in court.

The notice was served on the federal government’s prosecution team and Ifeanyi Ejiofor, the defendant’s counsel.

June 27, 2021 — The Federal Government in collaboration with security agencies apprehended and brought Kanu back to Nigeria.

July 26, 2021 — The Federal High Court, Abuja, ordered that Kanu, be remanded in the Department of State Service (DSS) facility, pending the trial continuation.