A 49-year-old man identified as Floyd Ray Roseberry from North Carolina was arrested and taken into custody on Thursday for allegedly attempting to bomb US Capitol Hill.

US Capitol Police chief Tom Manger told reporters earlier this Thursday afternoon that the suspect’s motives were not certain.

He said that law enforcement agents negotiated with Roseberry with him and hoped for a “peaceful resolution” and later on Thursday, the chief of US Capitol Police, Tom Manger, confirmed that he has been taken into custody after surrendering to law enforcement officers.

On whether there were explosives in the suspects pick-up truck, the security chief added it was not yet known and the investigation site was still considered to be “an active scene”.

“We still have to search the vehicle and render the vehicle safe,” Manger said, adding that the process could take hours.

He explained further that the suspect’s mother recently passed away, and that his family members pointed out that there were “other issues that he was dealing with”. 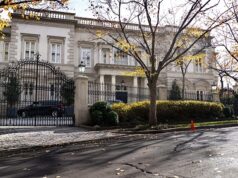 Half Of Cyberattacks During Russian Election Came From U.S. – Russian Embassy