The West African Examinations Council (WAEC) Nigeria, has said that the e-registration for the 2021 West African Senior School Certificate Examination (WASSCE) for school candidates will begin from March 13 and end on March 31, 2021.

It said the offline registration started on February 15 and would end on March 15.Head of the Nigeria National Office of the examination body, Mr Patrick Areghan, said this at a briefing organised to announce the release of the results of the WASSCE private candidates, 2020.

“Due to the challenges in the education system, a lot of disruption has taken place. Some schools are still running their third term. They do not have any SS3. So because of this, we had to take time to allow things to stabilise a bit.

“The results of 5,548 candidates, representing 9.02 per cent of the total number of candidates that sat the examination, are being withheld in connection with various reported cases of examination malpractice.
“The cases are being investigated and reports of the investigations will be presented to the appropriate committee of the council for determination in due course. The committee’s decisions will be communicated directly to the affected candidates thereafter.”

“24,491 candidates representing 39.82 per cent obtained credit and above in a minimum of five subjects including English Language and Mathematics.” 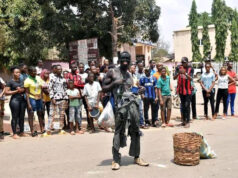