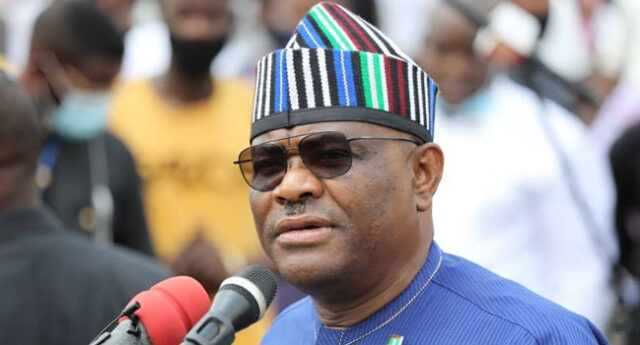 Deputy Inspector General of Police (DIG), Joseph Egbonike, on Tuesday, said about N114,290 000 million out of N360 million bribe for the 2016 bye-election results allegedly offered by the Rivers State Governor, Nyesom Wike to 23 staff of the Independent National Electoral Commission (INEC) has been recovered.

The DIG of Police appeared before the House of Representatives Ad-hoc Committee on assessment and status of all recovered loot, movable and immovable assets from 2002 to 2020 on Tuesday.

The officer, who confirmed the development to the panel, explained that the actual money offered was N360 million which they discovered in the course of their investigation, saying that the officers of the electoral umpire were actually involved but couldn’t recover the entire funds since 2016 that it happened.

The officer who appeared on the invitation of the panel when asked by the chairman to emphasise exactly what the money was meant for said: “There was a governorship rerun in 2016 between Governor Nyeaom Wike of the Peoples Democratic Party (PDP) and the main opposition at that time, which was the All Progressives Congress (APC), and the sum of N360 million money was offered as bribe to Independent National Electoral Commission (INEC) officials during the 2016 rerun governorship election in Rivers State.”

The Police said, those who benefitted from the governor were 23 in number, out of which only N114,290,000 million could be recovered since that time.

Responding to a number of questions by the panel members in a cross-examination from documents and exhibits previously submitted to the Committee, the DIG further explained that the matter has been taken to Court after the conclusion of the police investigation.

According to him, all the accused have been prosecuted at the Federal High Court in Port-Harcourt, but the judgement which was delivered in favour of the Federal government was appealed against hence, it was still pending.

“The said matter is still in court and I wouldn’t want to speak much on it, but the said amount you are referring to was recovered from 23 officials of INEC during the 2016 rerun elections of the National and State Assembly which was rigged in favour of PDP.

“Although, the persons involved have been prosecuted and convicted, the matter has been appealed and not dispensed.

Meanwhile, the police report and other related documents which were obtained by DAILY POST on Tuesday after the Committee sitting, showed a recovery of the sum of N114 290,000 by the Nigeria Police, Rivers State Command out of N136 million from INEC staff.

Part of the Police report read:

“On 10th December 2016, during the National and State Assembly rerun elections in Rivers State, efforts were put to rig the said election through inducement, bribery and intimidation of electoral officials, as the sum of three hundred and sixty million naira (N360, 000,000.00) was given by governor Nyesom Wike of Rivers State, to twenty three (23) electoral officials, deployed to Rivers State from Anambra, Oyo and Plateau States, to compromise and influence the outcome of the election.

“Consequently, on receipt of the intelligence, our investigation panel under the IGP Monitoring unit was set up, following which the sum of 114 million, two hundred and and ninety thousand (114, 290, 000.00) was recovered from the 23 INEC officials and deposited into the Central Bank of Nigeria.

Details of payment and breakdown of the recovery are attached here.

“All suspects are being prosecuted before the Federal High Court, Port Harcourt, River State by the Attorney General and Minister of Justice of the Federation”.

Meanwhile, a text message and calls made to the Special Adviser on Media to Rivers State governor, Mr. Kelvin Ebiri, not returned before filing this report.

DAILY POST reports that the Ad-hoc Committee which has been sitting for over a month before the lawmakers went on two weeks recess last week.