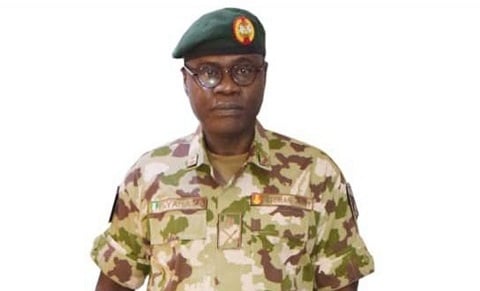 The Nigerian Army has said that the Chief of Army Staff Major General Farouk Yahaya, has not spent up to 36 years as a Commissioned Officer since he joined the Service.

It said that the record of service of an officer counts from the day he is commissioned, adding that the COAS captured his military experience to include the five years he spent in training as Officer Cadet in the Nigerian Defence Academy.

Yahaya had, while appearing before the House of Representatives Committee on Army for his confirmation, said he has 36 six years of military experience, falling foul of the statutory 35 years allowed in the Federal Civil Service rule.

The Director Army Public Relations Brigadier General Mohammed Yerima, in a statement, urged the public to disregard the report as unfounded.

According to him: “Our attention has been drawn to a publication by an online news medium where it was reported that the Chief of Army Staff (COAS) Major General Faruk Yahaya has served the military for 36 years instead of the 35 years statutorily allowed in the Federal Civil Service Rules.

“It is worthy of mention that the COAS while appearing for confirmation did mentioned to the Distinguished Senators that “what I brought along in this highly tasking office is about 36 years of military experience, having joined the Army on 27 September 1985 as a member of 37 Regular Course (Degree)”. He went further to state “….Since that time when I passed out September 22nd, 1990.

“For the records, the COAS had accurately captured his military experience to include the 5 years he spent in training as Officer Cadet in the Nigerian Defence Academy.

“The record of service of an officer however counts from the day he is commissioned. This is clearly stated in the Harmonized Terms and Conditions of Service (Officers) 2017 Revised.

“In the case of the 22nd COAS as he stated clearly, he was commissioned on 22nd September 1990 which is reference point for his service years. This therefore means the message being circulated is completely inaccurate and out of context.

“The general public is therefore advised to disregard this unfounded article as it was born either out of simple lack of knowledge of the military service or out of mischief which can best be explained by the author”.

BREAKING: Sanwo-Olu Opens Up On Tinubu’s Health After Meeting APC Leader In London