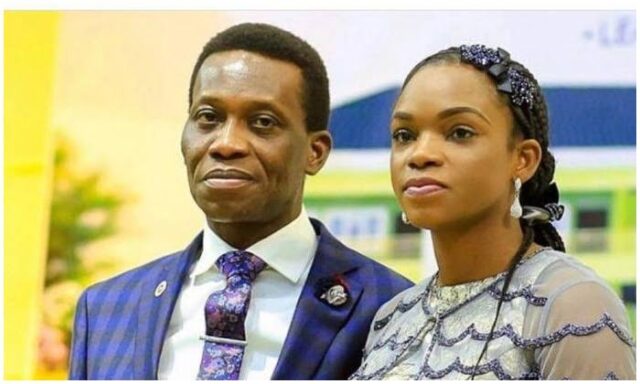 Temiloluwa Adeboye, wife of the late Pastor Dare Adeboye, said her husband was not afraid of death, adding that she was sure the late cleric was in heaven.

According to Temiloluwa, her husband told her before his death that if he died, he knew he was fulfilled because he had done what the Lord asked him to do.

Temiloluwa spoke on Monday at the Evening of Worship and Tribute which held at the RCCG, House Of Favour, Redemption Camp.

She said, “Pastor Dare, my husband was a wonderful person. He was amazing in every sense of the way. I do not mourn him at all; I weep because he left me. He slept, he did not die. And I know, I am sure, because on the resurrection morning, he will rise again and we will see him in glory.

“He said if I die today, I know I am fulfilled, I have done what the Lord has asked me to do, he was not afraid of death. He was not afraid. It is not a matter of time but how well and he lived a good life, he lived to the glory of God. He lived, he served God. His life was dedicated to Christ and that is why I am sure that he is heaven. I am sure that he made it. And I want to say brethren today, if you are not sure of your salvation. If you are not sure that if you sleep tonight, you might not wake up tomorrow, you are not sure of where you will be in eternity. If you have not yet given your life to Christ, if you are here today to see because you heard. Yes, it is true; he is sleeping in the Lord but are you sure of yourself, are you sure of where you will be? Are you sure of where you will be?”

CityNews Nigeria had earlier reported that Dare, the third child of the General Overseer of the Redeemed Christian Church of God, Pastor Enoch Adeboye, died last Wednesday in Eket, Akwa Ibom State, where he was based with his family. The 42-year-old was the Assistant Pastor in charge of Region (Youth) 35 before his death.
His death shocked the whole world as well-meaning persons including presidents, governors, and personalities condoled the 79-year-old general overseer and his wife over the death of their son.