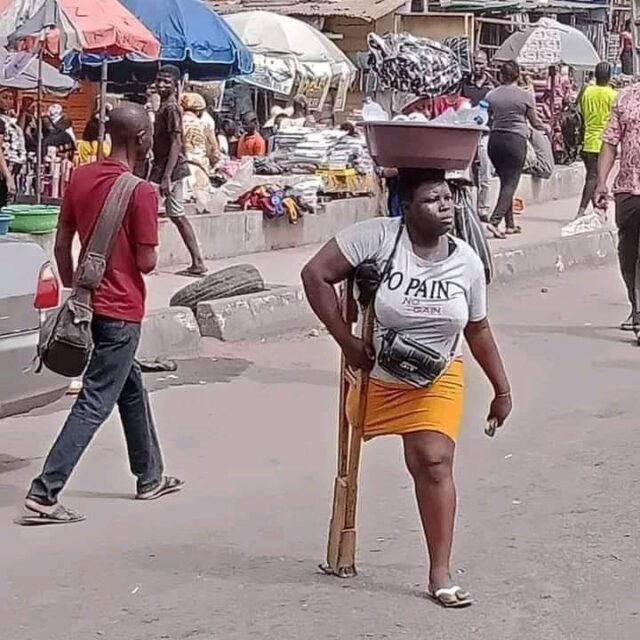 The Lagos State Government has undertake to take over the welfare of 26-year-old amputee, identified as Mary Daniel.

Miss Daniel is a single mother who hawked table water in traffic in the Oshodi area of the state to earn a living.

Recall that several good samaritans from within and outside the country have kept pouring into Daniel’s bank account after she was reported by newsmen during the weekend.

Daniel began to live through a difficult life after losing her parents and her right leg to an accident in December 2006 while they were travelling to their hometown in Ayingba, Kogi State from Katsina State during the year’s festive period.

It was gathered that she dropped out of Junior Secondary School (SS3), she took to the streets in Onitsha, Anambra State, selling sachet water to cater to herself and her aged grandmother based in Ayingba.

She was impregnated in 2018 by a man who denied responsibility, forcing her to relocate to Delta State out of shame.

Daniel relocated to Lagos about two weeks ago, hawking bottled water in chaotic traffic and passing the night on the balcony of a building on Suwebatu Street, Oshodi.

Among several other donations, a former Imo State governorship candidate, Uche Nwosu, on Sunday presented a cheque of N500,000 to Daniel with another N500,000 pledge by his friends.

On Monday, the Special Adviser to Governor Babajide Sanwo-Olu on Civic Engagement, Aderemi Adebowale, said the state government had taken Daniel to a protective custody pending the conclusion of plans to get her an apartment and set up a business.

Adebowale said, “The case of Mary (Daniel) was brought to my attention this afternoon (Monday) by the Managing Director, Lottery Board. Two politicians from Oshodi brought her with her ATM card. They said they were concerned about her safety as donations have been coming into her account.

“We asked if she wanted the state government to take over the case and help her settle down and she agreed. That is why the Office of Civic Engagement under Governor Babajide Sanwo-Olu is taking over her case. I have called the Commissioner for Youth and Social Development. She would be settled in a home in Ikorodu for about a week.

“I will be her guardian and make sure that she is properly settled in Lagos. We will make sure she becomes a responsible citizen in Lagos.”